by Roderick Allmanson at precisely 07:09
I finally got a chance to catch this flick, which is exciting. I almost enjoy not seeing Best Picture Nominees until after I make tons of predictions. At the Academy Award level all films are pretty deserving, it really comes down to timing and politics. More on that later this week in our final installment of the Oscar Zone Vol. II before the ceremony.

Anyway, this is a fantastic film. I don't know what it is about Boxing Movies and Gangster Movies, it seems like it's tough to make a poor one. The Fighter (2010) features an incredible cast, a classic underdog story as well as a unique family drama. It's assuredly an actor's movie so let's dive in (some spoilers abound):

Both Melissa Leo and Amy Adams have been nominated for the Academy Award for Best Supporting Actress for their roles as Micky Ward (Mark Wahlberg)'s mother and squeeze respectively. They both play very hard-headed strong women characters that are surprisingly good. Amy Adams hasn't had that high of a pedigree to her career so far but her turn here is excellent. She appears very natural as a college drop-out with some deferred dreams. Melissa Leo, the probable forerunner for the Oscar plays an excellent domineering mother. She treads that line between smothering and supporting her son very well.

The key to this film lies with the family dynamic. The characters bounce off each other spectacularly. Christian Bale as Dicky Eklund is spectacular. He gets into this character like he has always tried in his career but rarely succeeded on this level. His intense method acting is paying off for him. The key to all these crazy characters in the film tho is Wahlberg. As Bale characterised him at the Golden Globes, he plays the stoic character that really ties the rest of the film together. He's the center which makes it more difficult to judge how good his acting is. While his delivery seems flat it's part of the soft-spoken but solid character of Micky Ward. While everyone else around him goes nuts, it's his solidarity that ultimately keeps them all together. Micky's got a good enough heart that his mother, half-brother, father and girlfriend are willing (after a good amount of tension and a few thrown punches) to ultimately come together for that one big chance.

That's the key to this film. It's what distinguishes it from other boxing films. While we could probably compare Ward's character to Stallone's Rocky (tho he's much less awkward and appears as soft-spoken but more confident) and the insane family to Raging Bull (1980), it ultimately pulls in another direction which saves the film from being a simple retread. There is of course a lot more going on here. 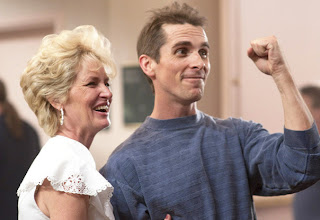 An understated but important theme here is hometown pride. The family doesn't live in a great neighborhood in not a great town. Micky is riding the pride and limited prestige his older brother Dicky once gave to Lowell, MA for a brief moment when he knocked down Sugar Ray Leonard (he might have tripped). At its heart the film is about Dicky accepting his fate as a has-been and finally stepping aside so that his brother may have a genuine shot. The same is true for the arc of their mother, who had favoured Dicky. He can't get over his own problems or ego for so long, it's not until jail when he's separated from Micky does Micky realise what he can accomplish without him (Tho he still takes Dicky's advise from prison. As unreliable as Dicky is, when he's on his game he knows what he's talking about). How can Micky preserve his important family dynamic while supporting his own dreams?

It's a tough call between a family who Micky loves yet is clearly holding him back and the opportunity to do something truly great. When he meets Charlene (Amy Adams the MTV Girl), someone close to him who encourages him in a more intelligent path to the top, he's ready to listen. This splintering of trust and loyalty to family and success drives the film. Micky, heart as big as he is though, understands that he won't be successful without everybody's help and he's strong enough for Dicky to finally curb his ego and apologize to Charlene, getting her back to his brother. With all this the stakes also begin to rise after Dicky's crack-addled HBO Special really destroys the Pride of Lowell. Micky needs to win not only for his own dreams but restore honour to his family and his town. He does. Yay.

Lastly, this movie is pretty sweet by how true it really is. The real-life Micky and Dicky are shown over the credits and in just a few seconds we realise how good Mark and Christian have been. Virtually all of the sets were real Lowell sets, some of which were actually the same gyms where the real Micky trained. They even used the same HBO Commentary and Directors for the fights. It's incredible. Even Mickey O'Keefe, Wahlberg's police chief trainer in the film was...the actual Mickey O'Keefe who trained Ward. I was pretty surprised at that one, O'Keefe had not had any previous acting experience, I'd call him flawless. Mark also trained intensely for this role, close to four years in between his other films he was waking up early and putting in the hours. The transparency of this film deserves some high praise.

I also love the comparisons to The Simpsons boxing episode "The Homer They Fall" (S8;E3). Naturally parodying other boxing films (mostly just Raging Bull), it's also and includes pastiches of real-life boxing icons like Don King and Mike Tyson. Anyway, Moe's major strategy to train Homer into a Champion Fighter is to stand take blow after blow until his opponents tire out at which point he'll nudge them over. Micky does just about the exact same thing during his fight with Alfonso Sanchez. I mean, he might have punched a bit harder but his strategy (tho maybe not on purpose) is almost the same as Homer Simpson.

So the characters and acting are excellent, the story couldn't be more true to life and the family dynamic is complex and interesting. Will it win Best Picture? No, because of the flick I saw in the theaters about 15 minutes after which I'll give some impressions of tomorrow.