by Roderick Allmanson at precisely 06:51
Alright folks, time to kick this Oscar Coverage into high gear. This week we're going through all the Acting Nominations and ranking their chances at grabbing gold. This isn't a very competitive year for Acting so this ought to be short and sweet. Maybe. Let's start with a surefire hit:

Best Performance by an Actor in a Supporting Role

John Hawkes for Winter's Bone (2010)
There's not a Penguin's Chance in Hell John comes home with this. It's an above average performance but Winter's Bone doesn't really have any momentum or enough esteem to warrant this kind of notice.
Chances of Winning: 1/5

Jeremy Renner for The Town (2010)
I know last year was Bridge's to lose but I still think that Renner may have deserved it more. These tough gangster-type roles have become pretty common though lately and tho Renner shines here if Wahlberg couldn't get love playing a hard Bostonian, Renner certainly won't. With the popularity of the Boston Crime Sub-Drama seemingly peaking, it doesn't look like we'll see much of this kind of thing again.
Chances of Winning: 3/5

Geoffrey Rush for The King's Speech (2010)
Here's one that I wouldn't be surprised causes a big upset. Without The Social Network (2010) grabbing anything in the Supporting Categories, the love of The King's Speech could spill over here. But Rush really captures the screen and has a bit of History with the Academy already. Since Firth is a near guarantee in the Best Leading Actor Category, a win here for Geoff would be pretty huge. Really in a year without Bale's momentum I'd have to give it to him.
Chances of Winning: 4/5

Christian Bale for The Fighter (2010)
The Supporting Actor category has been dominated by intense Villainous Performances for years. It's not since 2006 that we've had a really surprising upset, and this year will be no different. There's no one on this list that captures attention like Bale and while young, his impressive body of work and ridiculous method acting will finally get some recognition. He's snatched just about every award he needs to on his way here, while apparently unemployed (or not), this is sure to fire up his career. Anyone think he'll get one for The Dark Knight Rises (2012)? No? Good.
Chances of Winning: 5/5

Best Performance by an Actress in a Supporting Role

Hailee Steinfeld for True Grit (2010)
The Academy loved True Grit for some reason this year, tho it's been mostly ignored by other big awards shows. This was an auspicious start for Ms. Steinfeld but she doesn't really stand a chance among the other ladies present.
Chances of Winning: 1/5

Helena Bonham Carter for The King's Speech (2010)
I think Helena was the weak point of The King's Speech (like being the Punter of the 1985 Chicago Bears, though), but I wouldn't discount an upset. She's had plenty of high-profile roles over the years that haven't been recognised, possibly because she's highly overrated (just like her hubby).
Chances of Winning: 2/5

Jacki Weaver for Animal Kingdom (2010)
This is the bizarro performance of this list, but it might just be enough to push her over the edge. It would be a surprise win for sure and I know there's some pundits out there pushing for it. I don't believe Animal Kingdom has enough prestige though to really push this through.
Chances of Winning: 3/5

Amy Adams for The Fighter (2010)
Amy's had enough decent roles to build up to this, she's a babe and Hollywood loves honouring its little girls (at least it sure did in the past decade). Doesn't she fit in there perfectly? The performance itself is pretty decent but not enough to really seal the deal for me.
Chances of Winning: 4/5 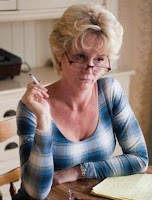 Melissa Leo for The Fighter (2010)
I was debating this, but Melissa's SAG award was the final indicator for me that she'll probably head home with Oscar come the end of February. She rambled about the Union in her acceptance speech, probably gaining favour with the bum actors voting for her in addition to coming through with a very good performance. The Fighter sweeps the Supporting Awards with no love for Mark Wahlberg? That's cold, Academy.
Chances of Winning: 5/5

Best Performance by an Actor in a Leading Role

James Franco for 127 Hours (2010)
Will Jim present an award for himself?! Not a chance. James does a nice job carrying this film but it's really not captivating enough of a performance to bring home Oscar. He's also got far too many goofy roles to his name so far for the Academy to take the hotshot that seriously. Don't worry, he'll put out a James Dean biopic one of these years and get some more love. The rest of the field this year is actually pretty decent.
Chances of Winning: 1/5

Jesse Eisenberg for The Social Network (2010)
Another young buck, Jesse's performance was very special in this film, the first scene alone aptly demonstrates both his quickfire acting and capability to deliver Aaron Sorkin's writing as crisp and sharp as it's written. While The Social Network has gotten tons of love, Jesse hasn't (and he should - we forget he's so integral to its success because he slips that much into Zuckerberg) and won't pull anything Oscar Night.
Chances of Winning: 2/5

Jeff Bridges for True Grit (2010)
Is there a current acting Chameleon as adept as Jeff Bridges? He slips in and out of roles seamlessly, his two December pics, True Grit and TRON: Legacy (2010) should demonstrate that. It's possible Jeff repeats (out-Roostering John Wayne helps), and becomes the second actor to win an Oscar for playing the same character as a previous winner (See Also: Brando and De Niro winning both for Vito Corleone).
Chances of Winning: 3/5

Javier Bardem for Biutiful (2010)
Was No Country for Old Men (2007) Javier's warm-up? Will this be his last Oscar before he throws his career to the throes of Blockbusterdom? Who knows. The amount of nominations from this picture are surprising and many picked Wahlberg for this fifth slot. Javier is no stranger though and he slips into roles just about as good as Jeff.
Chances of Winning: 4/5

Colin Firth for The King's Speech (2010)
Yep. Not a chance Colin misses this. I knocked him earlier for mere mimicry but he adds some more depth here than visible at first. While The King's Speech may miss out on the Supporting Categories, Firth will bring back some prestige here (Actually their recognition as Best Cast at the SAGs may present otherwise). He's won everything he needs to and won't stop here.
Chances of Winning: 5/5

Best Performance by an Actress in a Leading Role

Jennifer Lawrence for Winter's Bone (2010)
Like John, Jennifer does not have the politics or momentum from Winter's Bone to make much of a dent here, nor is it strong enough a performance to turn many heads. Keep plugging along.
Chances of Winning: 1/5

Nicole Kidman for Rabbit Hole (2010)
What the hell is this movie? Anyway, it's been a while since Nicole's last win, when she actually played an interesting character well, but her Norbits* have been piling up insanely since then. There is so much evidence on display that she's a terrible actor, I find a win here highly unlikely.
Chances of Winning: 2/5

Michelle Williams for Blue Valentine (2010)
Kind of like Amy Adams, Michelle Williams is the kind of good, principled young actress the Academy loves. She already had a nomination for Brokeback Mountain (2005) and has only grown as an Actress since. Blue Valentine has been this maligned movie, snubbed in its rating by the MPAA (eventually reversed) and in just about every other category by the Academy. C'mon. It's not the kind of film that can win Best Picture but with ten nominations there should be some room (at least over 127 Hours). The film was scored by Grizzly Bear! Alright, I'm done
Chances of Winning: 3/5

Annette Bening for The Kids Are All Right (2010)
Annette is the kind of overlooked actress that the Academy could recognise Oscar Night. She's been nominated four times in the past twenty years with no Statue to show for it. She got some love from the Globes but placing The Kids Are All Right in the Comedy or Musical Category was just setting Annette up for the win. Like Mark though, the success of this film has been two quiet, especially when compared with the heat behind Black Swan, which was robbed off any Supporting Nominations.
Chances of Winning: 4/5

Natalie Portman for Black Swan (2010)
Like Colin and Christian, Natalie has won every major award on her road to the Oscars. She's also been a steady force in Hollywood for the past decade and has the brains and class to be a perfect Poster Girl for the Academy. She's perfect for her role in Black Swan, exhibiting equal parts innocence and malevolence that is really an acting Tour de Force. And she learns from Toulour! Anyway, this is Nats' award to lose this year.
Chances of Winning: 5/5

Tune in next week to watch Norwegian Morning Wood examine the Screenwriting Nominees!

*I'm starting to love the term Norbit, it's defined as such: An actor's terrible film released after his or her Prestige Picture that leaves such a horrid taste in everyone's mouth that that actor loses the Academy Award he or she was nominated for. See: Eddie Murphy in Dreamgirls (2006) vs. Norbit (2007).