by Roderick Allmanson at precisely 11:01
Well here we are, folks. The Academy Award Ceremony is in two days and we've got one more major category to go over. The ballots were due on Tuesday and by now the winners are already in their envelopes and about to be immortalised in Oscar Lore Forever. You can read some more about the whole process of Oscar Week here. But now we'll discuss the most prestigious award of the evening and it's one that for now is up for grabs - Best Picture. Let's take a gander at everyone's chances: 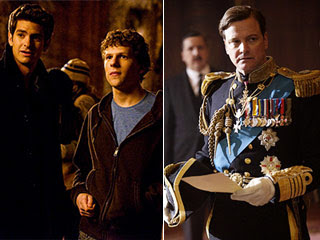 It's a shame that Wayne and Garth don't pick the Oscars. That's about the only world in which this flick could possibly win. Actually I'm sure that sketch has more of an impact on Pop Culture than Winter's Bone, mostly because the most anybody knows about Winter's Bone is that it's called Winter's...BONE. Hahaha.
Chances of Winning: 1/10

There's been some weird hype lately that this flick might pull down Best Original Song. I'll start citing this website which attempts to use some formulas to predict a flick's Awards Chances. Despite the heavy favourite Toy Story 3, it's possible this is the one category 127 Hours nabs. I don't personally believe it but at any rate none of the discussion is towards Best Picture or even Actor or Screenplay.
Chances of Winning: 2/10

It's starting to look as though this film may walk away completely empty handed although it's gaining the most ground in the Original Screenplay Category which I predicted earlier. Actually as you can see, it's just the only non-The King's Speech script that might win according to these people. If that film sweeps though, it's likely it will also grab one for writing. Other than that, Annette still has a slim chance of upsetting Natalie but there isn't a whole lot behind this film right now for Best Picture. Chaulk it up to no one caring about a gay movie not nearly as controversial as Brokeback Mountain (2005).
Chances of Winning: 3/10

I still want to see Pixar grab this in my lifetime. Actually I'd be psyched to see any Animated Film grab this award sometime, as well as any Director Nomination from an Animated Film. Despite its buzz among people who may have only seen this among the Best Picture Nominees (millions of people. Actually that joke almost doesn't work this year, who the hell knew Black Swan and The King's Speech could be $100 million movies). It's also possible this film has a pretty slow night, possibly only picking up Best Animated Feature. Then again, when I see it parodied and torn down so well by The Simpsons this weekend I don't feel as bad.
Chances of Winning: 4/10

There are plenty of pundits and math out there that actually favour this film in a few categories tho I don't really buy it. Eight time nominee Roger Deakins seems most likely to grab a statue for his Cinematography, but math gives the flick a fair shot in a few other categories that it definitely won't win (like Sound Mixing, c'mon). Anyway, the Academy just recognised one of the best Coen Films with tons of statues three years ago and it seems like their nominations have been granted ever since. True Grit is an excellent film but not as outstandingly shockingly good as No Country for Old Men (2007). Then again, that flick won in a very competitive year and True Grit's momentum seems to be rolling rather than slowing. I still don't think it's possible.
Chances of Winning: 5/10

This flick peaked a bit early and its Supporting Actor snubs of Mila Kunis, Barbara Hershey and Vincent Cassel seems to indicate the Academy didn't throw itself completely behind it. Then again, I'm saying all this when Natalie is an absolute lock for Best Actress. While it may have done a bit better a few weeks ago I think Swan Fever has passed and we aren't seeing this as often the week that ballots are due.
Chances of Winning: 6/10

It's unlikely that Mark's Opus wins more than the Supporting Acting Categories but Boxing Films have been involved in one of the most famous Academy upsets and snubs, so who knows. I place The Fighter ahead of Rocky (1976) but far behind Raging Bull (1980) in terms of quality, but we all know at this point that that doesn't really matter. As soon as all these films are released it's all politics, quality means a bit less. I think Mark's been underrated as both an actor (Wait...what?) but he's certainly underrated as a Producer. That being, he doesn't win here.
Chances of Winning: 7/10

I think Inception could roll farther than some people think. While its considered a virtual lock in both Sound Categories and Visual Effects, it wouldn't be a stretch at all for it to nab Art Direction, Cinematography and Original Score, and at that point is it that outrageous that it also takes Best Picture? It would certainly be a huge upset tho its entirely possible (and true) that Nolan really made a very technically proficient film that doesn't have a whole lot of "artful" parts such as acting, directing or is really the kind of film the Academy adores. In fact, there is this growing idea that Hollywood hates what Inception represents - a very successful uniquely original idea, as insane (or not) as that may seem. From this perspective I'd call it equally likely Inception walks away with nothing. What's hardest to say is that out of all the Best Picture Nominees Inception is about guaranteed the greatest Legacy. Good original action blockbusters like this are so incredibly rare these days. It won't find honor here.
Chances of Winning: 8/10

Now, a few weeks ago I probably would have flip-flopped my top two. Most of the Academy voters likely feel the same way, but The King's Speech is peaking at the exact right moment, when most voters submit their ballots at the deadline. While some like Peter Travers are desperately still campaigning for The Social Network, Roger Ebert has some good reasons to think that The King's Speech is the one. Math also decrees that the Facebook Movie will win (tho for some reason that escapes me the author decided not to factor in DGA wins, which is a huge deal. As anyone can see when you factor in these Awards the race becomes substantially closer). Remember when all we knew about The Social Network was that it was some kind of Facebook: The Movie! and it sounded ridiculously stupid? Now on the verge of Best Picture of the Year. Wow. It's tough to say, The Social Network has been riding a huge string of wins all year and if we were being conservative I'd still pick it to take home the whole thing Sunday Night.
Chances of Winning: 9/10

Luckily no one around here is conservative. The King's Speech is hot baby. It's the hottest flick, still scoring at the theaters, this film had ridiculous legs on its way to its current $104 million total.If I were submitting my ballot right now I'd be writing this one down as my number one, which is what I based a lot of this prediction on. The Academy all comes down to the right combination of momentum, politics and timing. Only when everything lines up does a film walk away with the Best Picture Award. Of course, I was a bit too cynical last year and blew this and most other predictions because I thought AVABAR (2009) would sweep but it turned into The Hurt Locker's (2009) sweep. When I made my predictions last month I again leaned more towards a sweep by The Social Network, which may bite me in the ass. Ugh I predicted a Black Swan / Inception battle over Cinematography? This is looking rough already. Now the only thing left to do is sit back and watch.
Chances of Winning: 10/10