by Roderick Allmanson at precisely 11:21
The 53rd Grammy Awards air tonight on CBS, so naturally I felt it appropriate to write up a quick post to complain about how terrible these awards are. The Grammys have long since abandoned any recognition of talent in music and instead appeal to mass popularity. It might as well be the Teen Choice Awards. 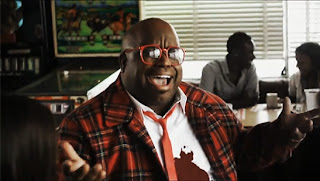 Not to contradict myself, but some of this year's nominees are actually decent. They're mostly decent in a way that a site like Norwegian Morning Wood would recognize though, not necessarily deserving of the Highest Musical Praise possible. Yeah I dished out lots of love for "Nothin' on You" by B.o.B and Bruno Mars, but Record of the Year?

Hence the major Grammy problem. They don't have any equivalent to the Oscars' The King's Speech (2010) or Winter's Bone (2010). There's no small underdog Record or awesome song that no one's heard of that gains momentum. Every massively popular Summer Jam that has a small bit of critical credentials is somehow the best track of the year.

Now like I said I want to give some credit to a couple of these. I'd love to hear the presenters say "Fuck You" plenty of times honouring Cee Lo Green. Eminem's Recovery is actually an excellent and popular Album. For song of the year though I'm cheering for Ray LaMontagne's "Beg Steal or Borrow," an excellent modern folk rock song. That's the kind of nominee that this Award Show needs more of, the true recognition of quality across music rather than grabbing for ratings and attention through riding the back of Popular Artists. In its way, Music is still much smaller than movies. The Academy Awards can still bank on prestige and get away with something like Slumdog Millionaire (2008) or The Hurt Locker (2009) running away with the night. Ironically, tho it is much easier to access and listen to smaller music acts (thus guaranteeing that little-known nominees could get much more exposure prior to awards night), the Grammy Awards tend to ignore this aspect.

So basically who the hell cares about the Grammys. They're a perfect sell-out Award Show for CBS. Actually it's cool to see what channel gets what shows. CBS is of course the most popular, broad Network, perfect for the Grammy Awards. ABC is the last really prestigious, classy Network, of course they show the Oscars. The Golden Globes are a self-important but outwardly meaningless Award Show, natural for NBC. Since NBC is the only station that cares about winning Emmys they fit there as well. Finally, Fox has...um...the Teen Choice Awards. Yeah, that fits.