Because it was on TV: Alcoholism, Addiction and Jersey Shore

by Roderick Allmanson at precisely 21:26
I could really do a post every week about this show. Everything about it is so simultaneously intriguing and disturbing. It's like a train crash full of Tigers and Anacondas, it's absolute horrifying carnage and mayhem but you can't just look away. You need to see who's going to strangle and maul who. It's a fascinating development. This has been an issue throughout the run of Jersey Shore, but the last few weeks and this season in particular have driven me to this post. The Alcoholism is rampant. I'm not talking about jokey partying "alcoholism." There are some serious issues that the Cast of this show should be dealing with.

This first really came to my attention during "Crime and Punishment" (S4;E4) which featured Cast Member Deena getting typically horribly smashed and pulled "the robbery" (#11)on housemate Vinny's Girl. Getting drunk enough to be a little bi-curious is one thing, there's nothing really wrong with that, but the morning after Deena has a complete breakdown and admits that she changes and can't control herself when intoxicated. It feels like an intervention. All her closest friends are there and Pauly D actually confronts her about changing. The fact that this is happening on Jersey Shore gives it a strange vibe, not least because they're very quickly back to the party.

The Women on the show seem to demonstrate the most of the Alcoholic Behaviour (well, them and Ronnie). The Men also get hammered but they tend to be able to control themselves better when the night gets down to it, likely because they want to stay rational enough to bring home a girl and bang her. Of course, this may have to do with careful editing than anything, but the stories present themselves with increasingly Alcoholic Tendencies from Deena, Snooki, Sammi and Ronnie. JWOWW doesn't often get too plastered; she's more often the sole voice of any reason in the house.

Deena and Snooki tend to earn the most pity. Snooki had her moment in "Where's the Beach?" (S3;E3) when she was arrested for public intoxication (during the day) while wandering around the Jersey Beach (The Episode Title is derived from her drunkenly screaming "WHERE'S THE BEACH?" while literally staring at it). She also did a lot of secret drinking at her place of employment that season, which has carried on to Season 4 in Italy. Hiding wine at work and drinking it on the job because you don't know how else to get through the day isn't funny. On a show purporting to be reality, it's a problem. 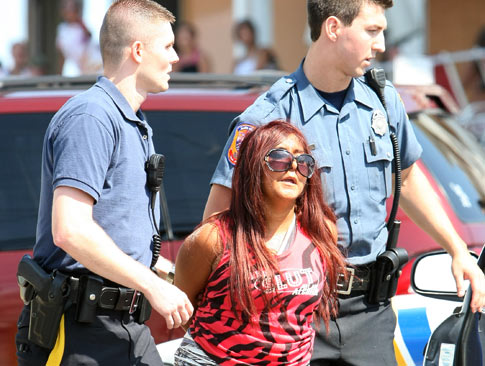 But this is all entertainment. It's voyeur. We get pleasure in the self-destruction of these people, facilitated by the fact that watching the show is like looking at a zoo. The characters are really despicable but within their own culture they're heroes, which makes it difficult to empathize with them. These creatures are free to go on and destroy themselves because to much of us they aren't really people. They may deserve their fate (which, to be fair, they carve out for themselves). There emerges an ethics issue when we not only allow their self-destruction but the MTV producers and cameramen also allow it to happen - all for the sake of profit. It's not like Jackass which featured the same kind of pain-for-pleasure entertainment, but I think as that show also demonstrated some real aftermath and reactions to the nuttiness, as well as very real consequences for one of its principal characters. This and the general charm and innocent yet immature vibe that show exuded separates it from other voyeur reality television. There's also the simple fact that we're laughing at the Cast's lives in Jersey Shore, Jackass involved a series of heavily pre-planned stunts, surely not their daily activities.

There is a sickness to Jersey Shore. With The Situation's recent mishap ("And The Wall Won," S4;E5) not allowing him to go out for a week we truly get to see what there is to do in this house without alcohol. Nothing. MTV sets up these situations for the Cast to drink dangerously and make terrible decisions. I'd bet they even cover the bills. It's also interesting that the only visible passage of time is their traditional Sunday Night Dinner, which happens in random episodes. There is no other indication of what day it might be, despite the appearance of constant partying. It's an incredible ability to actually exist without the distinction of days. Can you imagine? For it to really truly not matter what day of the week it is? What pieces of shit. Again, a lot of this occurs through creative editing, but it's certainly an indication of how much of their lives can be dedicated to drinking during this period.

So needless to say, I am far from an anti-drinking advocate. I get a little silly all the time. There exists in this House, however, the inability to survive without Alcohol in a few of the Cast Members. Within this mental realm MTV has poured gallons upon gallons of liquor in the interest of creating interesting television in order to achieve high ratings and make lots of money. There's something fundamentally wrong there, and one of the many reasons why this is one of the worst shows ever created by Humans on Planet Earth.

You can watch for yourself in about 35 minutes.