by Roderick Allmanson at precisely 18:49
Alright people, yet another Brand-Spaking New Season of Television is upon us and we here at Norwegian Morning Wood couldn't be more excited. As the leaves fall and footballs get hiked there is finally some new fantastic television programs to watch. Well, there isn't really a whole lot that has captured our interest this year. It will be an interesting season, though. Let's start by highlighting some of the Network's Newest Offerings:

Is Mad Men really that popular? Do producers understand it's successful because it's a well-written, methodical show with very sincere characters that's allowed a bit more freedom because of its existence on the Cable Channel, AMC? Is there any reason at all for Pan Am and The Playboy Club to exist? The answer to all these questions is no. There is some weird obsession with the 1960s going on, but not really the music, the politics or anything important. Instead we're interested in the sex and fashion, neither of which was all that good. I did like the wallpaper though.

There's also a growing trend or show re-makes, which is kind of bizarre. After Hawaii Five-0 really took off last year, virtually the only show to do so, ABC is really pushing Charlie's Angels, which to be fair has some serious Babe Potential going for it. I don't think it will be a Battlestar Galactica, though, the nostalgia is there but there has to be something worth uncovering. The Charlie's Angels movies were pretty popular and I always thought really defined turn-of-the-century action filmmaking. The new show doesn't seem to follow that paradigm though at all, so it's up in the air at this point. 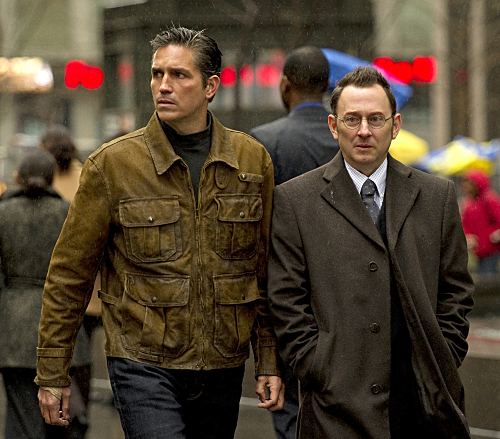 CBS might have the best new show in the wings with Person of Interest, which seems interesting, including Jim Caviezel in a non-Jesus role and likewise Michael Emerson in a non-Benjamin Linus role. Both will take some getting used to. NBC has been pushing the new comedy Whitney harder than most, still seeking to fill out that fourth slot on its Must-See TV Thursday line-up because Tina Fey went and got herself preggers, putting 30 Rock on a hiatus. C'mon, what are NBC's standards on Thursdays anymore? All they're shows are basically commercial failtures, why do they keep pouring money down the toilet? Whitney looks terrible, I think I'll actually be aching for some Outsourced.

Fox actually has three pretty interesting new properties. The first is Simon Cowell's The X Factor, which is such a blatantly arrogant rip-off of American Idol that will also somehow undoubtedly succeed, although it's self-admittedly a risky project for Simon, who is actually rich beyond belief anyway. It will be interesting to see if he's able to overtake his old show. Fox also has Terra Nova, which is propping itself up to be the next big huge thing, and possibly has the biggest Production Values and Budget of any show ever (at $4 million a pop it had better be a runaway hit. Still, it doesn't look all that great). I think the marketing has failed this show already, which is unfortunate. On the comedy side apparently New Girl is getting some good buzz, but I'm sure that's more about Zooey's position as the ultimate dream girl more than anything. Also is anyone paying attention to the quiet Napoleon Dynamite mid-season replacement adaptation coming this year? Are you serious?

There are two really big cast changes this season. After seven seasons on The Office, Steve Carrell left to be replaced by James Spader. Spader's character, Robert California is not nearly as iconic or hilarious as Michael Scott and if The Office lasts another Season after this it wouldn't be for the best. Actually, it wasn't really for the best that The Office has lasted this long.

The much more significant shake-up is Charlie Sheen's departure from Two and a Half Men after eight seasons. Well, he didn't depart so much as went crazy and got fired. His replacement is Ashton Kutcher, which really seems to come out of left field. For the first time since 2004 I'm actually interested in watching Two and a Half Men to see how the hell this is going to work out. Not only that - it's Bearded Ashton. If he's nearly as good as he was in Valentine's Day (2010) this is going to be awful. Man that's weird.

I am looking forward to my two favourite shows, Parks and Recreation and Community to come back for full seasons. Both of these shows might see the chopping block anytime but they've both nabbed a nice cult following somehow. They're also completely ignored by the Emmys, my largest reason for not watching that shitshow anymore.

I've always got my eye on what new shows are syndicated on Cable Networks and there's three big ones this year that are all very emblematic of their parent stations. F/X has acquired How I Met Your Mother, which is exciting. It's a surprisingly good show that is currently only syndicated on very late-nite CW and Oxygen. That's awful. It should find a nice home on F/X, which is all about grabbing popular CBS shows right now. F/X is also playing College Football games, just one more step towards turning it into the most complete Television Channel ever, with a batch of excellent movies, original shows, syndicated shows and sports. What's more mind-boggling is the fact that no other Basic Cable Station is trying this.

The Big Bang Theory is coming to TBS, which proudly adds another terrible show to a line-up that includes Meet the Browns, Family Guy and whatever the hell other crap they have. That one with Terry Crews. Very Funny indeed. I'm more excited for 30 Rock's appearances on Comedy Central, which is kind of a strange move. It should definitely widen that show's audience with tends to be incredibly niche-y. I'm eager for it to become more a staple of Comedy Central's line-up, which includes a lot of cartoons but actually surprisingly little syndicated Network Shows like this, besides Scrubs. But Scrubs is everywhere. All the time.

So that's about it. Will NBC Sunday Night Football again reign supreme for that channel? Will American Idol again kick everyone's ass in the final tally? With Netflix slowly destroying itself does TV have a chance? How can Terra Nova be profitable?! You had better turn on your boxes this Autumn to find out!