Because it was on TV: Rescue Me and the Role of Post-9/11 Television

by Roderick Allmanson at precisely 06:09
Somberly today Norwegian Morning Would acknowledges the Tenth Anniversary of the Terrorist Attacks on U.S. soil of September 11th, 2001. Ten Years later we're finally starting to understand the domestic and global ramifications of this attack. Some of us realise that we have become a society ruled by fear and hostility. Our unquestioned role as a guiding Global Superpower has utterly fallen apart. Despite this, the average American retains faith in his or her country, which in the face of such unrelenting catastrophe is either arrogant or delusional, but all in all a very American concept. The unwavering confidence in our homeland has grown both Global Resentment and National Pride

Amidst all these issues American Television in a Post-9/11 World is certainly changed. Television now seeks to emulate reality - both through explicitly "Reality Programming," a new wave of sitcoms and even a steeply increased Dramatic Production Value that seeks to place viewers as close to the stories as possible. 9/11 popped our innocence virginity. We no longer accept the fanciful, not when we're on guard every day. We've become more comfortable in the shaky-cam reality than artificial sets.

With all these stylistic and genre shifts there remains very little Television, or Pop Culture as a whole, that actually acknowledges the physical effects of 9/11. In the immediate wake of the attacks there were some outlets that dealt with the aftermath, such as the famous Amazing Spider-Man issue. There aren't characters or stories that deal with what happened on a daily basis though. This mirrors our lives really, we don't think about national tragedies every day, it's just impossible. The only show to do this is F/X's Rescue Me, brainchild of Denis Leary and Peter Tolan.

This post in itself is a victim of the 9/11 "celebration" criticism that Rescue Me expunges. The September 11th of every year shouldn't be acknowledged on one anniversary day then forgotten the rest of the year. It's not a holiday where we stop and have a little ceremony. That's how everyone else acts. That's how all other TV acts. Except Rescue Me. Denis Leary through his character, Tommy Gavin has expressed severe frustration with this concept. The problem with treating 9/11 this way is that as soon as September 12th comes around people go back to living their lives. Tommy Gavin can't do that. The consequences of that day continue to haunt him and he deals with that pain every day. Every day is a remembrance. We shouldn't have an excuse to talk about 9/11, it needs to be an ever present topic of conversation. 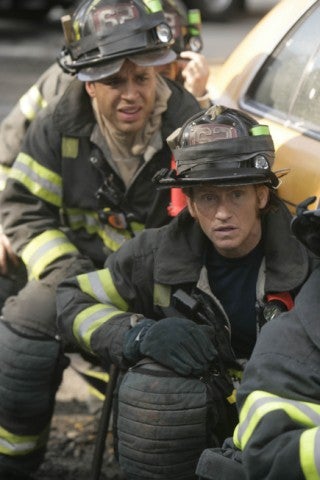 As I said, this can be difficult. Rescue Me became the only show on TV that deals weekly with the growing personal ramifications of 911 because it concerns the daily lives of a group of NYC firefighters. The emotional scars of these people don't leave so easily. The pain, alcoholism, and in the case of Tommy Gavin, literal ghosts that haunt him are a constant struggle. While he is dealing with family members who died in the towers, along with the other 343 FDNY who perished that day, in recent weeks suddenly everyone is focused on 911, many profiting on books, television shows, Exposés or whatever. He gets pissed. He has also been dealing with his own assholery and inability to construct meaningful personal relationships. It's a combination of such severe pain unconsciously compounding an already temperamental and naturally angry Irishman. Denis Leary emotes all of this in an extremely character-driven show that gains much of its inspiration by the darkest inclinations possible in a post-9/11 World.

Which brings me to a basic point about the show - All the acting has been incredible, as well as virtually ignored by the biggest Award Shows (1 Emmy win in 5 Noms and it wasn't Denis Leary). There is also a large amount of monologues that are very good, genuinely tense and exciting moments (both between characters and each other and between them and live fire) and a heavy amount of symbolism and metaphor between fire, alcohol and the Calling. It's a fantastic show. And now it's over.

So think about the victims of 9/11 today. And think about them tomorrow. And next week. Don't forget the men and women who lost their lives and don't let it be senseless. Rescue Me's Series Finale, which was very good (despite a rushed birth scene) was last Wednesday, so you'll never see a new episode of that again. Remember the deep scar on our national conscious, not only with our growing Society of Fear and Paranoia and its Global Ramifications but the personal struggles of the everyday people who lost people they loved on that day a Decade ago.

Labels: 9/11, Television
Email ThisBlogThis!Share to TwitterShare to FacebookShare to Pinterest