2012: Looking back on Looking Forward

by Roderick Allmanson at precisely 17:11
So, last January we made a list of twelve possible awesome cultural events for the Year of Our Lord 2012 that we were looking forward to experiencing. Looking back on it now, it's surprising how many of these things really sucked, and even more surprising how many didn't even happen. So, let's go through our list:

Yep. Chaulk this one up to one of those nonexistent things so far. The flick was pushed way back after Channing Tatum actually became a more bankable actor and while his character originally died early on, they are now reshooting it to feature more of the guy. Will that pay off? I'm a C-Tates fan, so I can't see why it wouldn't be a good move, though a second trailer much less cooler than the first (and not really that much Tate) isn't a great sign. 2013?

Read our full impressions here. This thing was certainly better than the first, but it's more and more clear that all these dudes can do now is pick up a big gun and blow people away. With rumours of Cage and Chan coming on board for a third installment, our interest keeps being peaked, but we know that it will never really be all that great. Right?

And...another one we didn't actually get to see this year. The trailer does look really awful, though, so we have that to not really look forward to next summer.

Josh Brolin was intriguing, and this was surely a whole hell of a lot better than the second installment, but ultimately this thing was still brought down by a lot of stupidity and less of the mix of fun, danger, and sci-fi that made the first one so enjoyable in the first place. 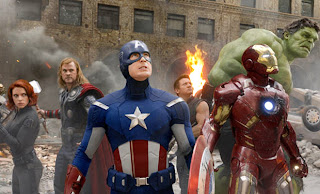 We'll say hell yeah on this one - The Avengers was a spectacular spectacle, if not a bit bloated and mass-marketed. Still, it was fresh, exciting, and the best sort of escapism in a year where we really needed it. This did more in the realm of pure entertainment more than any other film this year, regardless if whether or not it was actually a good film (it really wasn't). Still, the anticipation this thing has generated for all of Marvel's Phase Two, and the fact that it has basically changed big-franchise filmmaking ought to be a lasting achievement. Here are our initial impressions.

Bond came back in a big way with Skyfall, one of the best movies of the year, and certainly one of the best Bonds of all time. This certainly went above and beyond our expectations and fully connected Craig's Bond to the rest of the long-running franchise. Here is our full impression.

This one really snuck in there as one of the best films of the year - everyone will remember Whedon's big 2012 for The Avengers, but his part in this shouldn't be overlooked. This is a great film that really upended horror tropes, and of course has one of the better ridiculous endings of any film - really one of the craziest two minutes to ever be put on film. Watch it here, but I'd suggest sitting through the whole thing first if you haven't yet!

We just talked about this at length in our 2012 Sports Review and our Summation of the Games a while back. Needless to say it was a great couple weeks in Summer and kudos to our pals across the pond for putting up a good show. Less kudos to NBC for their stringent live streaming policies, but they made a shitload of money anyway, so what do they care.

So do we consider this a good film or not yet? I thoroughly enjoyed sitting through this thing and though many walked out frustrated and annoyed, I thought it was an incredible experience. Then again, I had less a problem with Lindelof's LOST, particularly the ending, than most people as well. If you were OK with not getting answers, which really, answers aren't fun anyway, but rather jazzed about a 2-hour thought experiment parading as an Alien prequel, then this flick was for you. Here are our first impressions.

This blew us away. I can't heap enough praise on Django, having just seen it and still being pretty pumped up about it. Go ahead and check out our impressions, but this was certainly a step forward for Tarantino and anyone who had the pleasure of sitting in the theater watching it.

What do we think? Vampire Hunter sucked but Spielberg's treatment of the main dude knocked it out of the park. By the end of the year I think we were all thinking of our Tallest President, from Daniel Day-Lewis to Bill O'Reilly. Why is the Kentuckian getting so much attention in 2012? Perhaps because we're realizing (scarily), that our politics aren't so different than they were back then - in times of great division we look to the Great Emancipator who unified the regions and races of our nation at a time where they couldn't have been farther split. Of course, he did this with an iron fist and will, and not a whole lot of people were on board with any of it. Barack 2012.

Chris Nolan saw his trilogy off with an end fitting the Dark Knight - it's tough to think of a film that could better have capped the last seven years of our Gritty Revisionist Batman that has really changed the way movies, in particular superhero movies are made (though Marvel is showing we can still give them a nice candy-coated veneer and make a buttload of cheddar). By putting into place every great last bit of the mythos as only Nolan could, new stars and old ones alike made this a memorable send off for one of the greatest heroes of all time.