by Roderick Allmanson at precisely 12:36
It's about time that someone came along and created a definitive portrayal of one of the Greatest American Presidents in all of History. Finally, something to watch on President's Day. In that President's Day post I noted that Abraham Lincoln's most definitive recent cultural depiction to date may well have been his appearance in Bill & Ted's Excellent Adventure (1989). Finally, though, Spielberg and Daniel Day have come along to give us a reason to live again.

Lincoln (2012) seeks to explore our 16th President through a very focused time period in the man's life. It centers around his efforts to push through Congress a 13th Amendment to the American Constitution that would outlaw Slavery. It's a moment in the President's life that is both little acknowledged and intriguing. It provides an opening to investigate both the greatest and lowest traits President Lincoln exhibited in his day. The film bypasses much of what has already been said about the man and what is already common knowledge, after all, wasn't that the job of Abraham Lincoln: Vampire Hunter (2012)?

The film really should have opened with a fun. video. I guess the brief but resonant scene of brother vs. brother in the muddy throes of battle will have to do. Spielberg almost gives us a bit of Saving Private Ryan (1998) treatment here - using an exhibition of painful brutality to engage our attention and let us know immediately what the people in the film are fighting for, as well as in this case, the results of President Lincoln's difficult decision to extend the war in order to maintain a perception that the 13th Amendment was necessary. 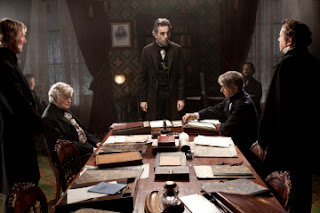 What follows is a long and in-depth examination of mid-19th Century American politics that is not sparing in its depiction of the political trickery required to push through one of the most important pieces of legislation in American History. The bulk of the film engages Lincoln in debate with everyone around him, from Radical Republicans to his own Cabinet to his family and constituents. Throughout it all Daniel Day-Lewis perfectly exhibits Lincoln's contrasting folksy, homegrown personality with an iron-willed determination towards his own perception of justice.

This is the biggest criticism of Lincoln's Presidency, yet it is often overlooked by contemporaries. Lincoln took the Constitution under his hat and wielded more power than any President before him (and more than most since. His only challenger may be Franklin Delano Roosevelt - is it interesting  how we honour our Presidents that most expanded the amount of power the Office may wield?). He supposedly did this justifiably - after all, he was fighting for the preservation of the Union, which later morphed into a fight for the freedom of all Black Slaves in the nation. In doing so, though, he was also fighting directly against the way of life for half of the nation.

In this sense, it's understandable that the South seceded upon the news of Lincoln's 1860 Presidential Election. Lincoln represented a threat to their way of life and during his Presidency vastly expanded the powers and role of the Federal Government. To this day the Rural South is fiercely independent in the sense that they favor a small government that is unobtrusive in their lives. They're also still pretty racist.

That's the kicker - even though Lincoln was absolutely contrarian to the Southern Way of Life, is he justified if that Way of Life was certifiably morally wrong? Most people living today would agree, and it's virtually impossible not to side against Slavery on this one, folks. What makes his Presidency so monumental is Lincoln's ability to forcibly "correct" an Evil Institution (we'll go with that instead of their favored "peculiar") that plagued half the nation and to not back down in the face of stagnant opposition. 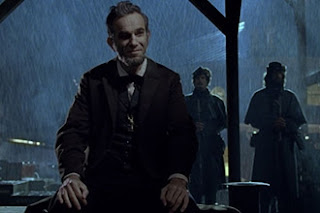 The danger, then, comes when a President may wield such immense power against a way of life whose morals are not so murky (to be honest, for contemporaries in Antebellum America, the idea of Black Slaves as property or another form of sub-human people was taken for granted and most moderate Republican Ideology sought only to prevent the expansion of Slavery into the Western Territories in order to preserve the lands for White Settlement and empowering their way of life economically. The moral judgment of whether Slavery was right or wrong was still up in the air for many Americans prior to Lincoln's incorporation of the idea into a rallying point for Northern Morale and into another ideological battleground [yet it did remain a difficult judgment to make for many after]). The South certainly didn't perceive it that way, and today there are many moral political ideas that could splinter families that the President has no real authority on which to engage political action. Just tell that to Lincoln, though. His immense trust in what he knew was right (and of course he was right) fueled his passion.

There are obvious parallels to homosexuality today. Obama should watch Lincoln and get inspired to force through a 28th Amendment against the wishes of a substantial group of people who are against the morally correct position. This statement offers tremendous debate in itself - but over the next century we may struggle to believe in a society that did not allow for equal rights to homosexual couples as we now struggle to comprehend an entire society that could believe that Africans were not real people.

The politics involved are dirty, using job offers to lame duck Democrats, in essence, Bribery to force Lincoln's way. This required an astute understanding of politics as well as the human condition on the part of Abe, Secretary of State Bill Seward (Dave Straitharn), and a trio of lobbyists (Jim Spader, Tim Nelson, Johnny Hawkes). This and the raucous Congressional Environment are unbelievable to picture today, which may be largely thanks to C-SPAN and the presence of rational-minded women Representatives. Well, maybe not. The political insight, virulent attitudes, and stodgy partisan entrenching defines today's politics even more than in 1865 - in fact, politicians today are probably less likely to flip a position than they were back then. And they're just fighting over healthcare and Mexican fences, not the liberation of an entire subjugated race of people. The biggest pill to swallow here of course is that it's the Republicans that are good in this film and the Democrats are the evil ones. Oh how times have changed...

Daniel Day-Lewis really doesn't even make this fair. Why should anyone even try to act in years where he decides to really chomp on a lead role like this? He's practically a shoe-in for his third Best Acting Oscar, where he'd be the first in history to do so. At this point he's well on his way towards Kurt Lazarus status. I'd love to see a special on how Spielberg even got him to match Lincoln's tall, gawky stature - did they film this Hobbit-style with forced perspectives or what? (If anyone has stumbled upon a making of, post in the comments!) He captures everything about Lincoln, from the physicality to the down-to-earth attitude. 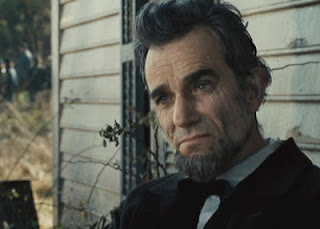 Lincoln deals with problems through anecdotes and storytelling, to the comical chagrin of his Cabinet members. He has a clever and sharp tongue and a specificity of language (note as Grant says to the Confederate Delegation that Lincoln would not accept a surrender proposal between "two warring nations" - because that's not what they are in Lincoln's mind - they are one nation split by rebellion). The film simultaneoulsy provides a political drama as well as an intricate character study.

Almost second to the politics are Lincoln's difficult family relationships. Mary Todd was basically batshit crazy by his point in her life due to an inability to deal with the grief following the death of her son, Willie. Indeed death seemed to follow Lincoln around throughout his life. His birth mother died when he was nine. His first love, Ann Rutledge also died when they were very young. After that came the death of Willie, and finally, Abe himself.

Lincoln was the first President to be assassinated, and throughout the film there's the subtle notion that the thought of assassination is inconceivable. This was a time of Presidential Reverence, and Lincoln tends to freely walk the streets, interact with the common people, and walks without fear (in actuality this was mostly true except for a secret carriage ride immediately following the election when there were threats to his life). As Lincoln became engulfed in the most-Death filled war in American history, his character is haunted by the spectre of tragedy. This is obviously why some people tend to blame Vampires. And yes, I did learn most of my Lincoln facts from reading Abraham Lincoln, Vampire Hunter.

Lincoln's death in the film is handled sublimely - we all cringe during an early trip to the theater, and likewise at the end after we see the final image of Abe walking off we're transported there again, except this time we only see Tad's reaction to the news, not the act itself. In fact there is no mention of John Wilkes Booth at all - I suppose that's wisely left to The Conspirator (2010). Tad would also actually die a short while later, in 1871, leaving only Robert Lincoln to carry on the bloodline.

Speaking of that dude, Joseph Gordon-Levitt adds to his fantastic year with his minor role here. Could we have a spin-off film featuring the older Bob Lincoln, and his role as President Garfield's Secretary of War? I think so. The side story of his desire to join the Union Army isn't integral to the main plot of Lincoln (2012) but provides depth to both characters, elucidating both the President's desire to limit the death that surrounds his own family and Robert's desire to serve his nation and make something of himself rather than ride the impressive and intimidating coattails of his father.

Lastly, it's time praise everything else about this film. It ought to receive Oscar nominations, if not wins, in Production Design, Costuming, and Make-up, as they're all astounding and perfect. The sets give an intimate confinement to every scene, and the costumes are extravagant, subdued, interesting, and historical all when they need to be.

It's also proper to mention everyone else's acting. The cast is particularly impressive in this picture. From character actors such as Michael Stuhlbarg (A Serious Man [2009]), to John Hawkes (Winter's Bone [2010]), and Jackie Earle Haley (Semi-Pro [2008]) filling minor roles to others who brilliantly play iconic historical figures such as Jared Harris' Ulysses Simpson Grant and David Straitharn's William Seward, everyone brings their A game. I didn't really like Sally Field, but I think that's because her character is terrible, which means she probably actually did what she was supposed to do.

The two dudes who really stand out though, are Tommy Jones' Thaddeus Stevens and James Spader as a 19th-Century version of James Spader. They eat up these roles with magnificent flamboyant flair and passion like only Two-Face and Robert California could do. It's a feast.

This is an incredible film. Who knew that by taking vampires out of the Lincoln Story we could have so much success? It's a technical achievement, even in its subtlety, an acting feast, and a dense political tale that's also one of the most important yet underknown in our history. Go get your Lincoln on, baby.