by Roderick Allmanson at precisely 01:10
This weekend past saw the release of Ridley Scott's latest film, Prometheus (2012), and in the short time since then it has been thoroughly dissected by the Internet at large. It has been either praised or lambasted to such an extent that it is almost overwhelming and dangerous to join in on the conversation lest I be honoured or sanctioned myself. Suffice it to say though that there is plenty more to discuss, which is telling of the richness of this film, a rarity in Modern Summer Blockbusters. For this film, NMW will split into an unprecedented 3 Impressions, first a summation of the basic components of this film, next all the Big Ideas and Themes, and finally, its place in both a critical and commercial culture. There are going to be plenty of SPOILERS from this point on, so shy away, nimble viewers, if ye have yet virgin eyes.

So for starters, folks, let's get into the surface. Yes, just the surface of this film for now. Visuals, characters, plot, setting, effects, everything that should make a Summer Tentpole nice and pretty and make lots of cheddar. 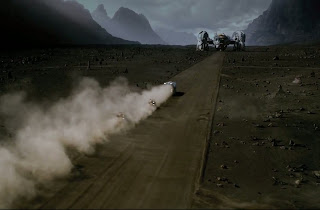 The first thing that stands out about this film is its technical achievement. Both its visuals and sound stand to reckon alongside any other film every made (by Humanity) and are immense to take in. Whereas the low-budget of Alien (1979) simultaneously forced director, Ridley Scott into a very confined and intimate shoot (which elevated the tension and horror), Prometheus' scope and budget allowed him to indulge his epic side (He did make Gladiator [2000], after all). This helps in setting one thing straight off the bat - Prometheus really has nothing to do with Alien cinematically. It's not quite a prequel, merely an exploration of the universe. It doesn't really deal with the same controlling idea, although there are plenty of similar themes. Despite this though, the grandiosity and lofty ambition of Prometheus' story positions itself as almost a direct counter to the visceral, if not greatly inferrable nature of Alien. This has been discussed ad infinitum.

Lest we journey too far into what this film actually means, suffice it to say that Prometheus is a big film, it's shot in open expanses with breathtaking, if not sullen landscapes and gripping cinematography. It's sound is also a great boon, at this point it ought to be an early candidate for Best Sound Mixing at the Academy Awards. Its gripping auditory and visual qualities ideally pair with its narrative content.

The cast is also fantastic. We'll circle around here. From ribbings between Sean Harris (The crackhead fro Harry Brown [2009]!) and Rafe Spall (The moustached guy from Hot Fuzz [2007]!) to a guy who really looks like Tom Hardy, what's perhaps most impressive is that three white guys with speaking roles are the first three to die. If this film actually had Tom Hardy in it, it would have just about every in-demand actor from 2011 - 2013. Beyond that outer circle we have Guy Pierce in not great age-make-up (How come the Jackass make-up guys are so good at this but big mainstream movies like this and J. Edgar [2011] are terrible?), and it's interesting to think that his strongest contribution to the flick is his fake TED video. And thanks to that video, I know what TED is (6/13 EDIT: Some behind-the-scenes reasoning for Guy Pierce's existence in this film only as an old dude can be found here, apparently there were once going to be tons of flashback scenes and Geezer Weyland would have been Max von Sydow [great choice], but then Ridley was like fuck it). 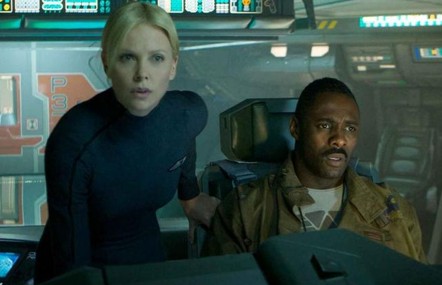 Getting into the main cast, let's talk Idris Elba and Charlize Theron. Both have had a pretty huge year, and when throwing Fassbender into the mix, you've got one of the most buzz-filled casts of any zeitgeist ever. Idris is coming off his Golden Globe win for the mini-series Luther, and Heimdall be damned, I really want him as Black Panther. Charlize is pulling double icy-bitch duty with this and Snow White & The Huntsman (2012) coming out back-to-back as well as building on one of her career best roles in Young Adult (2011). It's only natural that these two get it on in perhaps the film's only hilarious moment, and that Charlize is later crushed to death by an inescapable black phallus falling out of the air (caused by Elba crashing into the Engineer's departing vessel). Sure, she could have run to the left or right...but you know she kind of wanted it (or is at least not as obsessed with immortality as her father - more on that later).

Let's spend our last round on The Human Shark and Noomi Rapace. Fassbender's quickly proving that he can play about anything. I mean, didn't you see him in Jonah Hex (2010)?! You didn't?! Good choice. See, Fassy can play two comic book characters, why can't Idris. He's the stand-out dude in this flick as the android David, and most of any kind of Promie theory should center around his creation, existence, motivations, and significance. This is kind of what Fassbender did in X-Men: First Class (2011), absolutely rise above everyone else of interest in a well-cast, well-done film. Noomi joins him in only her second English language film and fittingly inherits Sigourney Weaver's heroine role. Oh, we weren't comparing this to Alien?! Fuck. She delivers the right doses of compassion, strength, caring, and wrath to deliver a well-rounded performance that tries to steal back the spotlight from Fassy.

The tone and tension of the film is near-perfect throughout and there are oodles of great squeamish painful moments that stay with you long after the flick has played out, including an unorthodox surgery that should remain this film's signature scene. Can we compare it with the chestburster scene (-No Alien comparisons! Oh fuck it), certainly, though it may not be as fast and shocking, it's no less the unexpected birth.

So, at this point we ought to talk about the stupidness.There is quite a bit of stupidness in this film, and I'm going to try to get it out of the way here, because all in all this was still one of the greatest filsm of the year. The stupid stuff is all kind of obvious by now, though. I don't think it's all that hugely stupid that they take their helmets off to breath the air or rush to explore the Alien structure in a short time span. The Tom Hardy-wannabe is a dive head-first, impulsive kind of guy, and while that could be stupid, it's not inconsistent with character. The not getting out of the way of a long falling structure, yeah, I've never understood that. It happens all the time. 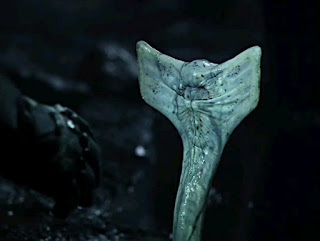 The two big stupid problems I do have are with the aforementioned former crack addict and his partner in crime, the moustached Sanford Detective. The former supposedly specialises in his "pups," one of the cooler bits of technology that maps out the whole structure. Still, despite being the main map-making dude, this guy gets horribly lost. The latter supposedly specialises in "biology," although he has apparently never seen or heard of a cobra or any other animal displaying cobra-like behavior. That thing does not want to be petted, sir. What the hell is wrong with you.

Check out our second post here, where we talk about some of the incredibly heavy themes, address some of the seeming inconsistencies, and make some conjecture. This is really the best kind of movie there is - because there can be so much interpretation and conjecture to engage audience interaction. That's building a brand in the 21st-Century, ya'll.