by Roderick Allmanson at precisely 22:38
Here we now exist in that most magical week of the year - the Final Week of 2016! A nebulous time between Christmas and 2017 where hopefully you aren't doing all that much. I for sure am not. Most web pundits and bloggers out there spend all of December going through their top picks for the year, but I'm of the opinion that you've got to wait until the last possible minute. After all - are we to capture the entirety of 2017 or what?! Our Official Top 10, which will be undermined to death in the years following what's hot right now and what has Legacy, will come shortly - but let's start off with the Top Movie Moments of the Year, along with other Superlatives. I always like this opportunity to highlight some great bits from otherwise sullied films, but this year a lot seem to be one in the same. Let's begin:

CIVIL WAR won't ultimately make our cut, but damn if it didn't come close. There are a lot of great moments here, and the Cap vs. Stark one on one at the very end is surely the apex of their long-building personal conflict. Here is where almost all of our Superhero Movie wishes are granted though - the Battle Royale between an array of costumed weirdos. Everyone gets their little moment, with Spider-Man and Ant-Man the sure standouts, never better than when they turn against each other. It's pretty grimy but above all a hell of a lot of fun. Damn near perfect as an action sequence.

So let's now go in the complete opposite direction. The VVitch has been left off many Best Of year lists for whatever reason, likely a combination of recency, unwatchability, and its genre-ness, but it wastes no time showing what kind of movie it is by undercutting all the main characters, immediately showing its hand that there is a real live Witch preying on this poor settlement, and thus setting the stage for everyone else to turn on each other in mystery, suspicion, and yeah, bewitchment. It's not the only scene of the year that shows up on this list for sheer brutality, but it's the kind of thing that will stick with you long after this film is done fucking your soul.

No clip available quite yet, but of all the well done scenes in Arrival, the most cinematic and visceral is the gravity change. The best shot for sure, likely for the year, is the initial approach seen above which is simply breathtaking. The best scene though, has got to be when Amy Adams and Jeremy Renner first board the giant black egg. It's a trip just to see that physics seem to work a bit different here, but you feel the unnerving experience all the way, along with the horrifying disorienting tension of turning around and seeing nothing but a plummet to your death so long as this mysterious anomaly holds. It's an excellent combination of acting, editing, and shot choice to combine for a really engrossing moment.

I still continuously debate whether or not Sausage Party was any good - the humour is extremely sophomoric, but conceptually it's brilliant. And I'm all about sophomoric humour, but even this was probably too far gone. It culminates by throwing off any shackles it may have purported and somehow finds a way to push things even farther. This scene is actually kind of sexy, but in a way that makes you feel exceptionally dirty and never really willing to look at tacos the same way again. It's a pansexual fiesta that you can watch over and over again without ever getting the answer to the most important question of all - how the hell is this a movie?

Green Room is all-around amazing, at least until its flat ending, and it's tough to pick a singular scene, although this was one where I had to pause the movie and walk around a bit to shake it off. At first you only hear Anton Yelchin's yelps, and up to this moment you think that the bar's owners may not be so bad. Sure they're Nazis, but seem more shady than evil. Here's when everyone's intentions are laid bare without pretense of help or negotiation. Also super gross. It's a moment where no one can turn back from.

Years and years ago I posed about films that harness the Awesome Power of Rock to advance their plots. I actually only came up with two, but that was seven years ago when this site was pretty rough. Yeah. WAS rough. That post was in honour of Brutal Legend for fuck's sake. But here's #3, and as cliché as the song choice is (which every year unfortunately feels more dad-ish. What is wrong with us?), it's apt for Kirk and the marketing campaign. Who cares, the Beastie Boys destroys Aliens. Or mutated Humans or whatever the hell those assholes in Beyond were. It comes together sublimely.

"Would that it were so simple" - Hail, Caesar!

I don't know why this scene works so well in a film that's altogether kind of meh; striking for a Coen joint. Both Ralph Fiennes and Alden Ehrenreich had big years in their own right, and the chemistry here is fantastic in a scene that's plotwise fairly out of place (then again, everything is in Hail, Caesar!), but thematically sound. After a while you're not sure if you should laugh or continue sitting in amazement that all these characters exist, from the exasperated Fiennes just barely holding back his rage but maintaining true professionalism to poor Ehrenreich's Hobie Doyle who is hopelessly out of his element but just trying to do the best job he can. It's a subtle fantastic bit.

Another relatively forgotten yet competent comedy, everything comes together by use of Zach Efron's sexy distracting dancing. Ike Barinholtz's forever horribly misguided clown steals the show by popping up at the worst moments in a bravura madcap sequence through a tailgate in a film that never totally eclipses its predecessor.

Scene of the year picks should always be obvious, and this was an easy pick. No reliable clip up yet, but surely this will eventually be the most-watched Star Wars video on YouTube. Sneaking in with just a few weeks to go, the forty year cultural culmination that we didn't even realize we needed - Vader being Vader re-purposed but never lost is the most 2016-scene in a long year of franchise re-contextualization. He's re-earning the title as cinema's #1 bad guy and displays the kind of fearsome power we've always just merely imagined. There's an argument that his threat is scarier in A New Hope (1977), but I'd challenge any hater to watch this over and over.

Actors of the Year 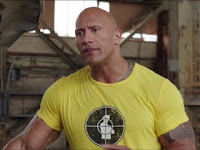 This was a tough call. On the male side, Ryan Gosling made a damn good case for having the best 2016 out of anyone, although he just had The Nice Guys and La La Land, but with an incredible comedic performance against type (or at least angsty Drive [2011] type) in the former and the latter which could go on to big things come February, that's significant. The male actor of the year, though, has got to go to Dwayne "The Rock" Johnson, which is horribly unlikely considering The Rundown (2003). Or maybe that was an early signal of his endless charisma. He only had two entries on the year as well, but Central Intelligence was the most popular live action straight comedy of the year (if you ignore Deadpool and Ghostbusters which kind of straddle genres), and Moana, even if it's just his voice, was huge and totally an animated version of the big lug. He's also the Sexiest Man Alive and with 2016 sandwiched between two Fast and Furious films, it feels like he's non-stop.

The woman's side was a bit tougher to figure out. Melissa McCarthy had two big films, but neither really made a lasting impact. I bet you even forgot the non-Ghostbusters one. Amy Adams makes a strong case for herself with Batman v. Superman: Dawn of Justice, Arrival, and Nocturnal Animals, which presents a nice range of roles, genres, and exposure. I really want to lean towards Margot Robbie, though, whose three flicks include Whiskey Tango Foxtrot, The Legend of Tarzan, and Suicide Squad. While her role was minimal in the not-much-seen Foxtrot, and Tarzan didn't make too much of a splash, when Suicide Squad works at all it's largely due to her Harley Quinn, and with a slew of roles lined up, she's got 2016 in the bag.


Best Trailers of the Year

Lastly, let's go through the trailers. An art form in their own right, we got a lot of the same crap yet again this year - big Inception (2010) - level BRRRRMMPP's, fast cuts, rising editing, and a whole lot of footage that isn't in the final product. But a few stand out:

The LEGO Batman Movie (2017) - proving both that Will Arnett may indeed be the best Batman of our age and that there are endless interpretations of the Caped Crusader - including this one that seems to walk the line between camp and self-seriousness, at least in a self-aware way. It's complicated.
A Cure for Wellness (2017) - I like switching gears fast. This is the kind of film that needs a great trailer to draw interest, and it scores big here. Sure you've got the re-purposed pop song, but it works super creepy wonders here.
10 Cloverfield Lane (2016) - Dropping a first look three months ahead of a release is bold, but when the trailer is this good you're good to go. This sells everything about you need to know about the tone perfectly.
Rogue One: A Star Wars Story (2016) - so none of this footage made the final film, which is kind of crazy. As a mini-movie this is brilliant, even if the tone and even implication of plot doesn't fit the still fine final film. This still gives me chills though.

C'mon - the top trailer of the year couldn't be anything else. This is damn near perfect for a character's ninth outing, not counting appearing as a cut-out on Ryan Reynolds' face in Deadpool (2016). You know, Deadpool is the most successful X-Film, maybe the problem this whole time has been Hugh Jackman. One part Old Man Logan, one part Reavers, hints of Mr. Sinister, and a busted out old Professor X in the mix sounds like a damn good time, and the hollowed out, mutant-less tone seems less like a superhero film and more like a superhero dropped into Unforgiven (1992). I'm down.

Stay tuned for much more coverage of 2016, including our fabled Top 10 film list along with our look backs at television, music, and more!