by Roderick Allmanson at precisely 05:32
Welcome once again to Norwegian Morning Wood's Yearlong look at the Greatest Holiday Television Specials Ever Conceived by Humans. Now that we're well into Summer it was a bit more difficult finding a good episode that really captured the American Independence Day, the Fourth of July. Hot dogs, air explosions, beer and freedom - there's not much more needed for a good Fourth Celebration but due to normal American Television schedules more often than not there are no new episodes aired at this time of the year.

So after some good searching I found a pretty good episode to a great series that has a couple minimal references to our Nation's Birthday. I present to you the Final Episode of The Wonder Years, "Independence Day" (S6;E22).

It's really the finale of a Two-Part Episode, the first being "Summer" (S6;E21), also apt for this time of year. If you're unfamiliar with the show at all you might want to check that out first for some background. Both episodes are the culmination of the ultimate growing-up show and takes the nubile young Fred Savage to some adventurous dramatic heights. A lot of this does tie in to Independence actually, so keep up-

Fred Savage throughout the series always had a few things constant for him - a loving if not pressuring family life, a nerd best friend and a perfect babe girl-next-door on-again off-again GF. Winnie Cooper filled the socks of any boy who discovered himself in the early 90s and Fred was tappin' the shit out of her. Righteous stuff.

Eventually as he mused about the world, what he wanted to do, what he wanted to be, he made the hard choice to quit work at his dad's Furniture Factory and explore the world on his own looking for his Dream Girl, Winne Cooper. It's an important episode that balances dreams, expectations and reality as well as providing a necessary tether to independence. See, like this great country of ours, Fred Savage rejected his home land, where things were safe and warm to strike out in Independence, despite unsurity if he'd make it. He strikes out anyway though, because he needs to. He needs both to find himself as well as finding the world around him.

What he finds is not what he expects. Winnie Cooper, a lifeguard at Summer Camp barely speaks to him and Fred later sees her smoochin' on some bro. What the hell, man?! So Fred freaks out, gets them both fired and ends up hitchhiking to who knows where. Ironically he's picked up in the same car is Winnie Cooper. They argue, are kicked out and exclaim that they hate each other.

Then it starts raining so they bump uglies in a barn. Hardcore hay bale shit. Wet and wild. So they make up and come back to their hometown on the Fourth of July. Thus they celebrate a kind of mature Independence, Fred gains the respect of his father with a bit of needed distance instead of his bratty rebellion featured earlier. He separates with Winnie Cooper amicably and they become true lifelong friends, although they do not marry (which supposedly upset some fans - I think it's great they didn't go with the obvious - it makes Daniel Stern's narration that much more meaningful that he has such fond memories of this chick who's not lounging off quaaludes in the other room). 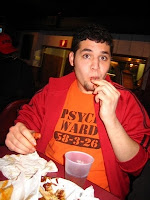 Ultimately Future Savage sums up Independence Day - it's about coming home to a Family each year, but feeling a bit different. Our perceptions of this Summer Landmark inevitably change as we get older. As we change. Like Winnie Cooper says, "I don't want it to end." The way we move on is a signifier of our integrity and character. The Fourth is about family and home, which in the best situations remain similar as we go out in the world and find ourselves to be the ones that change. Beyond the beer and hot dogs, even the jingoism, that's what Independence Day is about. True, mature independence within yourself. That's real freedom.

Above is a friend of mine from college. He looks exactly like a fat, hairy drunken Fred Savage. He really loved that nickname. Whether or not he ever laid someone like Winnie Cooper all I can say is...no. No he did not.

So go out and celebrate your Nation's Heritage by blowing up a small part of it. I know a guy who can get some fireworks...