by Roderick Allmanson at precisely 22:40
Mission: Impossible - Ghost Protocol (2011), otherwise known succinctly as M:I:IV-GP is by and large one of the superior action films of the year. It's interesting that somehow the Mission: Impossible franchise has largely enjoyed some of the better action film writers and directors leave their marks in its 15 year history, above and beyond the typical nostalgic-TV-series-to-movie bullshit treatment. It's successful because these directors hold their films to a high standard and despite Tom Cruise's insane personal life and reputation, he rarely appears in a poor movie.

Mission: Impossible is Tom's franchise. It's his Rocky series or his Terminator series, tho he has taken some healthy breaks in between each installment, helping not to crowd things all that much or really push things only for nostalgia. In fact, neither M:I:IV-GP nor Mission: Impossible III (2006) has many winking callback moments that plague other travesty late-period franchise installments such as Terminator: Salvation (2009). It feels fresh as its own film as much as an installment in a trilogy.

Tom is an Insane, Insane Man 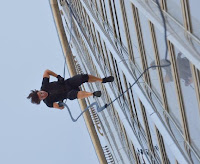 M:I:IV-GP rests soley on the Cruise. While the 49-year old not only still miraculously looks fully capable of believably performing all the stunts he pulls, he...actually does perform all of those stunts. That's really him dangling from the Burj Khalifa (with some ropes deleted in post-production), but it's also him running, jumping, and kicking ass all over Russia and Mumbai. He brings this insane, fearsome energy to his role, it seems like he's always on the brink of madness, even when he's coolly smiling or undercover.

This could diminish any other movie, but it really works here. Ethan Hunt is no longer the semi-retired, calm and collected dude from M:I:III. They brought his character to some dark places (although they magic marker-erased it by the film's end, a stumble which is largely the film's greatest fault) and this simultaneous tired craziness along with an unyielding focus towards his mission (even while on the absolute brink of Armageddon) makes Tom the perfect dude to play this role.

One Day Every Franchise will Feature Jeremy Renner Supposedly also the new Jason Bourne, as well as Hawkeye, Jeremy Renner is tempting overexposure in a very large way and is looking at a big 2012. His role here though is interesting. He's like this amalgam of Tom Cruise's action credentials and Simon Pegg's comic relief character. He serves as this running commentary of how insane everything else in this movie is, heartily questioning Tom's antics and even their enemies' subsequent reactions. While the franchise has become too bloated with characters indoctrinated in their own insane world, Renner actually serves somewhat as the audience's connection to the other characters and provides an outlet for those "what the hell was that?" questions.

In general though, this film doesn't paint is heroes as super at all. Nearly every plan gets a chink in it and it seems like nothing goes well (which Tom later comments on). Whether it was showing Tom's age or just showing that his character is human, there is also a great deal of mis-timed jumps and landings that really knock him around. This is a great film to watch if you really want to seem Tom Cruise get his ass kicked. Like, Harrison Ford in Indiana Jones and the Kingdom of the Crystal Skull (2008) is still able to do everything that he did in Raiders of the Lost Ark (1981). Tom here is sloppy. He needs to go to the hospital...a few times. It's not like it makes the film realistic or anything, there are certainly some goofy script problems (like the precisely inconvenient sandstorm), but there is a greater human touch than the typical actioner revival.

In Soviet Russia, Kremlin Bombs You!

I don't think any of these spy movies are the same after the Cold War ended. For some reason having that enemy that was so clearly defined who also acknowledged us as an enemy just made for lots of really great stories. The Soviet Union also worked because they didn't even really do anything to us either, it's not like you were offending anyone or bringing up a national tragedy to feature them as evil dudes in a movie. Nowadays it's difficult to pinpoint another omnipresent threat, which is weird because there's real dudes out there like Team 6 doing badass covert stuff more important than any movie.

That said, it's tough to find a good international enemy. Captain America: The First Avenger (2011) went back in time to fight the Nazis, Iron Man (2008) got away with killing some fictional group of bad brown people, but nowadays Bourne fights his own government and Bond fights a group of mysterious unattached Europeans. M:I:IV-GP interesting brings back the Russians as the big bad, although they only chase our hero due to a frame up. This film and GoldenEye (1995) interestingly deal with the espionage remnants of a Cold War Hangover.

That dude from Slumdog Millionaire (2008) was unnecessary. Paula Patton is hot. The technology was ridiculous. I don't even have a smartphone. Brad Bird, welcome to live action, glad to have you stay. I really thought that Tom Cruise was starring in a Prototype movie when I first saw this.