by Roderick Allmanson at precisely 13:39
There has only been 13 of them, and they're usually amidst the best films of the year, so it's always kind of a big deal when Pixar releases whatever it's been cooking on for years. This weekend past they let loose Brave (2012) on to the world and it's certainly better for it. Brave certainly belongs in the upper echelon of Pixar films, close to the Nemo (2003) / Wall-E (2008) / Up (2009) category, though it may not surpass any of them. Here there be SPOILERS from this point on, so o sum up the courage to see Brave if you haven't already.

It has become almost a classic Pixar move to write stories like this in their better films. Brave is a stripped down, elegant glance at a handful of characters that inhabit a well-defined unique world. The narrative is fast-paced, mysterious without being complex, and has equal parts light and heavy, both tonally and thematically. It's that rare film that Pixar makes to look easy - a film authentically designed for all ages to enjoy.

Technically, this may be Pixar's most impressive film. They love jumping after a challenge, and they go nuts with two of animations biggest challenges - hair and water here (including some impressive scenes where they do both). Lead Princess, Merida's defining feature is the huge tangled red mop on her head, and it's gorgeously animated here, every curl and bounce both defining character traits and showcasing how good Pixar's animators really are (as if they have had any detractors, ever). Beyond that though, the scenery from the forests to the mountains along with the grass, fur, and cloth of everyone else has a real weight and feel to it. It's breathtaking and a true accomplishment.

That's never all Pixar does, however. They usually try to jump on some compelling story, and Brave doesn't slouch with this, either. It's a Princess Story, and while at the outset it looks like a typical teenage rebellion tale (and, Pixar must have some unruly daughters in their home, they really nail that frustration perfectly), it becomes a very different story after (SPOILER) Merida turns her mom into a bear. Yeah, they did a great job of not letting that one slip out of the gate. Usually in stories like this the Queen is a big bitch and it's just left at that. There might be a conclusion at the end of the story because that's where the conclusion is supposed to go. Princesses find their happiness and lose their rebellious nature from settling with a man, not actually making up with their parents. Pixar doesn't buy that, and it really authentically reforges the torn relationship between mother and daughter after getting into the heart of the problem. There's this interesting set of parallel stories running through the movie, which become more apparent when it's revealed that the evil Demon Bear Mor'du is actually the long-lost evil brother of an ancient kingdom - victim to the same fate as Queen Elinor. Yes, apparently the Witch that Merida sees has the same solution to every problem: turn people into bears. So, to back up and set some context, Elinor tells the tale of an Ancient King who divided his kingdom among his four sons. One of those sons, though, was a dick, and upset at his Father's ruling went to the Witch to change his fate. The witch then turned him into a Bear, he eventually lost his mind and his kingdom was ruined. On the way, he became known as the Demon Bear Mor'du and chomped off Merida's pappy's leg, causing him to have an unending grudge with all bears. Ouch.

This is interesting though, because while King Fergus is on an unending quest to kill Bears, he's really peeved at his own history. The pride, jealousy, and competition has never ceased, as evident when the descendents of the four kingdoms arrive to vie for Merida's hand, and end up just rough-housing each other. There's this communication breakdown based on the mistakes of the past and the need to rebel against forefathers. Any Prometheus (2012) connection, eh? It's clear that Fergus' feud represents the themes inherent in Brave on a more macro-level, the political strife and inability to lead without overcoming personal issues.

The brother's spirit lived on through the bear, though, and full of regret, used Will O' Wisps to lead Merida to the answers to a similar problem. Out of pride Merida fought with her mother and their relationship suffered. They also could not communicate with each other, which ironically becomes less of an issue when Elinor turns into a bear and can then only speak in the Language of Bears.

There is also a lot in this film about breaking tradition. Mor'du broke tradition when he went against his father, which lead to the collapse of the kingdom. It's interesting that this is the film's primary villain, though it's not the bear itself that's the biggest threat, though its presence does loom over the whole movie. It's more the threat of what Mor'du represents - the worst of everything that can happen when people are victims of their own pride. Merida, however, is able to break the tradition of it being bad to break tradition by breaking tradition all the time. Get that? She rebuffs against the idea of suitors shooting for her hand and wants to be a warrior more than a princess. There are no Xenas allowed in this kingdom. She is eventually able to inspire the kingdoms to allow their progeny to find their own love, instead of arranging courtship. 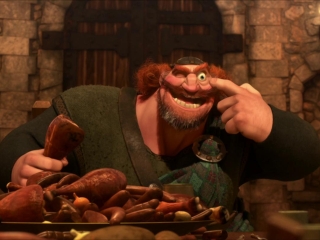 So there's a lot going on at once, but the heart of this story is the relationship between mother and daughter and the bond they rupture then repair. Elinor's also a babe and naked for most of the film (although...a bear). The movie does have a lot of cuteness, from the Triplets mischief, both in child form and bear form, to Merida's own precociousness. Even Fergus, the rapscallion. It is cuteness of the highest caliber, enhanced by real relationships.

Lastly, the film chroncles the age-old struggle between Bears and Scots. It certainly captures all the Scottish stereotypes - kilts, drinking, fighting, incomprehensible accents - it's all there. It also captures Bear stereotypes - river fishing, cute human-like behavior, omnivorous behavior, being godless killing machines. Not a stone left unturned. It's good to have a film that centers both on Scots and Bears. We needed this.

So that's Brave. It's a great film, maybe not as compelling as Wall-E or the first 10 minutes of Up, but it's definitely up there in that solitary distinctive classy Pixar territory. In the face of Monsters University (2013) next year, we ought not to get another one as good as this in a while as the studio keeps going back to the well instead of innovating and pushing both its technical and narrative capabilities.