by Roderick Allmanson at precisely 21:50
The failure of That's My Boy (2012) this weekend is somewhat surprising. While it's true that Sandler was slightly playing outside of his normal High School-Level maturity crowd with the R-Rating (meaning that everyone bought tickets to Madagascar 3: Who Cares [2012] and snuck into That's My Boy?), stars playing against type, especially in the R Department have done well lately, just check out last summer's 1-2 punch of Horrible Bosses (2011) and Bad Teacher (2011).

At any rate, That's My Boy was a supremely enjoyable movie - if you're into it. I'll give a SPOILER warning here, because there are some great shocking moments that are worth seeing for yourself, but if you've caught the flick already or just don't care, feel free to press on: 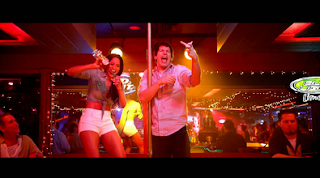 This is really another convergence of Happy Madison and SNL alumni, as could be guessed by the featured stars, Sandler and Samberg. For once though, the Happy Madison crowd is kept at bay. Blake Clark puts in equal doses of human and disturbingly weird. Nick Swardson is also in the film exactly as much as he needs to be and does exactly what he needs to do - act really insane all the time and at one point get punched in the face. Peter Dante is also very briefly included as the hated stoner son of Samberg's father (inexplicably played by Tony Orlando).

That's one of many really random roles in this film. Yeah, it's that Tony Orlando of Orlando and Dawn fame - what the hell? There are also three sports personalities - Erin Andrews as a secretary for some reason, Dan Patrick as a reality show king, and strangest of all, Rex Ryan as Adam Sandler's Tom Brady-loving Lawyer. Has any other NFL coach acted in a Hollywood movie playing someone other than themselves or in stock footage? What is he doing here other than to make New England Patriots jokes?! At least those jokes are hilarious.

Other than that, we've got SNL alums Ana Gasteyer, Rachel Dratch, Colin Quinn, and Will Forte all doing their various little roles, although none but Forte are really used for anything worthwhile. I'm more interested in James Caan as a psychotic reverend, Luenell finding another apt role as a stripper and Ciara as her surprisingly approachable Babe Daughter. Rounding out the cast we have a hilarious and somewhat disturbingly douchey performance by Peter Petrelli himself, Milo Ventimiglia as the fake-Marine brother of the bride, and again inexplicably, a huge role for Vanilla Ice and Todd Bridges as his chicken nugget stand boss.

Let that sink in a bit. Vanilla Ice has a huge role in this movie. Still, it's played absolutely for laughs, and even though this could very well be a documentary about Vanilla Ice's life, his inclusion is hilarious. Most cameos are used pretty well. The best may be Eva Amurri playing the sexual predator teacher who gets herself preggers by a 12-year old Adam Sandler, leading to the birth of Andy Samberg aka Han Solo Berger - flash forward thirty years to the version of her in the present day and the character is played by Eva's actual mother, Susan Sarandon. Sarandon must have a thing for playing Samberg's mother, and both actresses are fantastic here, naturally. Eva, maybe less so, but she sure is a babe. The kind of babe that no 12-year old could ever say no to.

Lastly we have Leighton Meester as the put upon but kind of insane Bride-to-be, and Samberg doing an excellent job playing the straight man who is eventually goaded into accepting the insanity inherent to his conception and raising. That's the thing about Samberg - he may be one of the funniest dudes on the planet, but his sense of humour is so off-kilter that it really works best in shorter formats - unless he's in a movie like this that doesn't assault you with his mugging for two hours. What he does best here is take punches and get hurt, which is awesome.

Finally there's Sandler himself, who dons the most obnoxious Beantown accent since The Departed (2006). Actually it's far more outrageous. He's playing this really insanely - a chronic alcoholic, sexaholic, worthless father to the hapless Samberg.

What this film is actually about is a bit hazy. It keenly makes the claim that a 12-year old boy who has sex with his hot teacher isn't a victim, he's a hero. Then again, that's been done before. There isn't a single woman in this film who is not a sexual object. Not even Tony Orlando's elderly mother, who manages to bang both Sandler and Vanilla Ice. In one night. It's that kind of movie. If you think this kind of thing is funny, it's worth watching. I couldn't stop laughing.

There is also a bachelor party to rival some of the craziest nights out from recent films like The Hangover (2009) and Project X (2012). It's certainly a film filled with depravity, though, from incest to mannequin-fucking to shotguns aimed and fired at children, this movie has a bit of everything.

There are some parts of That's My Boy that try to be a sentimental Father's Day movie. It is about a Father and Son bonding after years of neglect, but it's also clearly a documentary about what happens to Sandler and his kid from Big Daddy (1999) after years of ice cream for breakfast, no showers, and decades of shitty parenting. The big speeches at the end aren't revelatory, they're fairly retarded, which nicely keeps with Sandler's character. It's also about accepting who you are, even if that person is poor and shitty. Thus, Samberg's Todd Peterson becomes Han Solo Berger, and instead of hanging out with Leighton Meester on Wall Street, hangs out with Ciara in a strip club. It's a tough choice to be sure, but we all know the right choice. Right?

There are a few problems here. It's mercilessly racist, slightly homophobic, and makes fun of fat disgusting people, uptight rich people, white trash, and even some off-colour remarks over African-Americans. It's kind of awful, but awful in an all-encompassing sense that doesn't leave anyone out. Does that make it better? That's always the argument in South Park-like media like this, but there isn't a ton of redemption for any of it. So there's that, but I'll say again, this flick is hilarious - and with a movie like this, that's all it has to be.