The Road to a Blockbuster: Redheads & Abe Lincoln

by Roderick Allmanson at precisely 05:54
Another Summer Friday has dawned and naturally it's time to examine the movies premiering across the nation. All Summer long we've been trying to judge the commercial, critical, and cultural impact these flicks will have. This weekend presents an interesting combination - we've got Brave (2012) from Pixar that looks very much like a return to form after the Cars 2 (2011) debacle last year. On the other side of the spectrum is Abraham Lincoln: Vampire Hunter (2012), based on the only book I've read in the past three years. While both are period films in their own right, both should be anything but average in their delivery.

Let's start talking about Brave and how ridiculous Pixar is. Lately they've had somewhat of a sequelitis phase, what with Toy Story 3 (2010), the aforementioned Cars 2, and the forthcoming Monsters University (2013). None of these were really asked for, tho we're pretty thankful for Toy Story 3. That said, Pixar seems like it's getting on to the kind of slippery slope usually reserved for Ben Stiller animated films - concentrating on celebrity voices and toy sales more than story. This is in the wake of Wall-E (2008) and Up (2009), which remain two of the best films of any kind in the past decade. 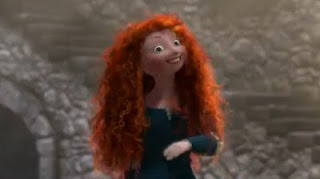 So the big question becomes where will Brave land? Apparently there is more to the film than what the marketing seems, if Director Mark Andrews' word is correct. Needless to say though, the Pixar brand is ridiculously strong and they've built their pedigree on both both an extremely high quality of filmmaking as well as friendly broad appeal. It's the perfect critical and commercial nexus that is rarely seen in media outside of Seinfeld. They have positioned Brave pretty well both building upon the Pixar Prestige as well as introducing an interesting, if not somewhat played-out premise. You've got the Katniss-like heroine reluctant princess who apparently fights bears. This particular trailer was brilliant, though, encapsulating everything you need to know about the premise and setting up every important character in a single scene.

Let's get back at that last thought for a second though. This is Pixar's first female-centric film, and of course it seems like another Disney Princess. Why can't the lady stars of any kid's film be anything besides a Princess? It's kind of bizarre, tho that's not to detract from the obvious fact that Merida seems like a great new character for the Pixar Canon. It's also probably the most gorgeous of anything Pixar's done to date, which is kind of stunning.

So while this is taking the kid market we've got Abe Lincoln: Vampire Hunter to occupy the adults. The major problem with this concept is that most Pixar movies have such a broad appeal that lots of adults or at least young twenty-somethings smack dab in the middle of Abe's demographic would also love to check out Brave. So, who's going to see this movie? Probably the crazy R-rated extreme movie lovers - the same dudes who went out to see director Timur Bekmambetov's last major flick, Wanted (2008). That's really not that big of a number.

Vampire Hunter has done a nice job as of late, however. The thing about this movie, though, is that it works more as a high concept than an actual film. It's enough to check out the Badass Presidents series to get the joke inherent to this kind of historical fiction. The most interesting this about this kind of stuff is reflective. Is this the sort of revisionist history that made the ending of Inglourious Basterds (2009) so memorable and entertaining? Or is it just to make History interesting again?

Here is an interesting take - positing that the new insane revisionism is the modern incarnation of telling tall tales, which I can buy in a folksy sort of way. The big question is what will people see more - this or Spielberg's December-bound Lincoln (2012)? Is there more of an interest for a sincere take or are we really full of that much postmodernism to advance this kind of story? These are all big questions and the success or failure of Vampire Hunter isn't sure to answer them, but I am pretty curious to see if this shit catches on.

This is a rarity, actually. I'm not sure I've read any book before seeing the movie first. Maybe James and the Giant Peach (1996). I think that was one of the few books I read in school before seeing the movie - and as a result I hated that movie. Is this how all you book readers feel all the time? What an awful feeling. Abraham Lincoln: Vampire Hunter the book is actually an incredible read. It captures the tone it needs to perfectly, bouncing with equally genuine appreciation from authentic Lincoln biography to insane vampire hunting tales. It is all consistent with Lincoln's character, though, and the writing is competent, reverent, and intelligent. Writer, Seth Grahame-Smith also composed the screenplay for the film, which gives me hope, but films are so collaborative who knows where his voice ended up.

So where are we? It's a choice between an intriguing animated film from one of Hollywood's all-time most reliable studios and a fairly insane horror-based historical fiction that offers to mash tropes together instead of innovate and move beyond them. It's gingers vs. vampires in the ultimate battle of the Soulless. Where do we go from here?