Because the Web-slinger's Back: Re-examining Spider-Man 3

by Roderick Allmanson at precisely 13:40
Well folks, The Amazing Spider-Man (2012) is doing pretty well in theaters, even if for all its "untold story" garbage in the marketing, nothing is really all that fresh in the final cut. Still, the hype is enthusiastic and exciting. with what's left from Spider-Man's A-Rogue's gallery (are we ever going to get a Rhino or Vulture movie...or better yet Stegron! Yep.) putting on quite the show. With all this, though, you almost get the feeling that all the flash, bright colours, quick cameras, and the back-to-High School setting is all to get us to forget how terrible Spider-Man 3 (2007) was - however, with some repeated viewings of late, I've started to develop my own hypothesis about this movie. Should there be a spoiler warning here? Ok, if you're one of the seven Eskimos who hasn't seen a lick of the first Spider-Man trilogy, go ahead and stop here.

First of all, I was able to catch the film a few times playing on F/X this weekend after reading this interesting article from Badass Digest. It's important to get into that critical frame of mind. Author, Devin Faraci suggests that Raimi is bucking against other "dark" superhero films by showing what classic nerd Peter Parker believes to be "cool" and "edgy," when in fact, these concepts are arbitrary and do not belong in a Spider-Man film. Within the film, every other character also rejects his behaviour, as does Peter eventually himself.

There's more to it than that, though. The first half of Spider-Man 3 is almost an experimental Spider-Man story, a fractured look at the character that also reflects Peter Parker's many doubles in this film. The first thing we need to understand about Spider-Man is that he is a dark character in that awful things always happen to him. The fact that he retains his responsibility, high spirit, and humourous attitude in the midst of the terrible things around him both makes him human and provides the foundation of his enormous popularity.

Nothing is supposed to go right for Peter Parker. After never fitting in in High School he gains incredible power, but must still keep it a secret. He's still picked on in class after becoming Spider-Man and when he tries to stand up for himself (see his fight against Flash Thompson in Spider-Man [2002], he's ostracised further). He's built not to ever get a break. His employer hates Spider-Man, his closest family hates Spider-Man, and truth be told, most of New York City typically hates Spider-Man (the films, obviously, do not portray the city this way). Nothing is supposed to be easy for the wall-crawler.

Peter is also characterised by continuous tragedy. Throughout the comic book run, he loses his parents as an infant, his Uncle Ben in his formative origin, the love of his life, Gwen Stacy as well as her father, his best friend, Harry Osborn, and even his Aunt May, his maternal figure. Spider-Man, perhaps more than anything else is about holding yourself to a great personal responsibility in the wake of a relentless stream of personal tragedy.

The first two Raimi Spider-Man films very much carry on this tradition. In Spider-Man, Peter Parker can't get anything done, his selfish acts (blowing off the library to win some money, letting the crook get away to smite the arena owner) come back to haunt him when he loses Uncle Ben to the same crook. Later on, just when Norman Osborn develops into a surrogate father figure, Peter loses him as well, to his own insanity and later death. The film ends with Harry Osborn swearing vengeance against Spider-Man and Peter rejecting Mary Jane, mostly because he doesn't want her to get kidnapped every couple of months. That doesn't work.

Spider-Man 2 (2004) really racks it up a notch. Peter's life on his own is terrible. He has a shitty apartment, never sees his friends, and is run ragged by working multiple jobs, studying at Empire State University, and slinging around as Spider-Man. Most of the film deals with how much everyone else hates Spider-Man, the stress of which is finally enough to cause him to lose confidence in his own powers. From there it continues the idea that Peter isn't meant to have a mentor, as another possible father figure, Otto Octavius again...turns insane and dies.

Spider-Man 3 is weird though. During the first half of the film, everything is going Peter's way. There's a lucrative staff position open at the Daily Bugle, the city loves him, he's with the girl of his dreams about to propose, and content with his life. This is a huge problem. It very much runs against everything Spider-Man is about - he has no personal problems. Like I said, though, this is an experiment; placing Spider-Man at the center of a very un-Spider-Man story. From here it's interesting to see how much Peter Parker fails. The movie is frustrating because it seems like he always acts like an unbelievable douchebag throughout the whole thing. The idea, of course, is that this is how a guy acts with sudden new confidence who has been screwed over his entire life. He doesn't know what to do with himself. The Black Costume exacerbates this, extrapolating his aggression, demolishing his meek nature, and ruining what it means for him to be Spider-Man.

As I said earlier, there are a lot of doubles in Spider-Man 3. The first, Harry Osborn lives a life in mirror and reverse of Peter. He is enormously wealthy in contrast to Peter's intense poverty, and while Peter has the redhead chasing him, Harry is left alone. They both lost their father figures who were instrumental in them becoming superhumans, the key difference being that Uncle Ben left Peter with the message of responsibility and Norman left Harry with a message of only vengeance. The thing is though, Harry has always wanted Peter's life, despite its financial hardships. He has always wanted a family that loved him and is intensely jealous of that. Harry finally catches up to at least Peter's super-power status, but remains a twisted mirror image.

For much of the film, after Harry has amnesia (Yeah. Yeah, that's a bad screenwriting problem. Maybe they got the idea from James Franco's presence on General Hospital), he's the kind of supporter and provider for Mary Jane that Peter should be, if only he had remembered this was a Spider-Man movie. The key to Harry's transition though is, again, his foundation. While Peter deals with loss through sucking it up, being humble, and moving forward without hurting his loved ones (see: Spider-Man's aforementioned ending), Harry doesn't deal with rejection well. He's still a spoiled brat. His powers spoil him to do things other people shouldn't do, instead of Peter's use of powers to let him do things other people wouldn't do. He becomes bitter and angry at loss. When the new Peter (with some Black Costume enhancement) finds this, instead of dealing with the situation he becomes confrontational. It's no longer about humility, it's about countering a threat.

Possibly Spider-Man 3's biggest flaw is that while they did the doubling so well with Pete vs. Harry there's no real need for the same thing with Pete vs. Eddie. Brock is a much more surface-level mirroring and isn't nearly as emotionally pitched a threat as the "main villain" as Harry is. His is a professional rival to Peter who is similar in many ways except, again, for the difference in confidence that comes at the expense of integrity and humility.

Eventually, Peter figures out what movie he's in. Instead of being a victim, he's actually the one to hurt his loved ones (blowing up Harry's face, shoving Mary Jane), and for that reason this doesn't actually feel like a Spider-Man story until the point where Peter swings into Harry's loft to ask for his help. It's the first time in the film, about 1 hour and 45 minutes in by the way, where Peter is likeable and humbly asks for forgiveness and help, a staple of normal Spider-Man tragedy stories.

The difference after this point is that while Peter finally acts like Spider-Man for the last half-hour, Brock carries over all the negativity, selfishness, and excess of power that Peter had experienced for the whole film. He has no regrets, because he too has been slighted by an overblown Spider-Ego. However, Eddie then mirrors Harry, because while they both hold understandable grudges, Harry also forgives his friend (which still isn't that justified by only a scene with Bernard the Butler, but hey, this can't be a 4-hour movie) while Eddie can only hate. He too has no base for which to understand how to use his power.

So, what's the point of all this? The pay-off to the whole fucking thing, the whole build-up is to that last half-hour where you're reminded what a great Spider-Man story can be. Peter is both forgived and forgives, he actually uses his intelligence to beat the big bad (the first time he does that in any of these movies), and he again suffers a great personal tragedy when Harry dies once again, his friend. Harry really sucks at fighting, by the way, I needed to throw that in there. He gets hit in the head and thrown around constantly - he should not be fighting Venom.

Needless to say, there a tremendous amount of problems with this movie, notably the lack of proper treatment for the threat Venom should have, the shoehorning in of a sympathetic Sandman story, and the throwaway use of Gwen Stacy as a floozy for Pete to make MJ jealous. It's an awful way to cram a lot into the last Spider-Man film, without really the foresight that there could be more like the current Amazing Spider-Man to do some of these characters justice. All in all, though, Spider-Man 3 remains a reaction not only to trite "dark" takes on characters, but also messes around with the typical Spider-Man storyline, and eventually rejects its own reaction and caves back into what makes Spider-Man stories great. It's something that Amazing can't do, even with all its insane merchandising. 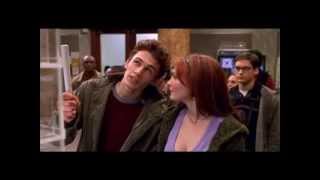 If you also want to revisit Spider-Man 3, um...the entire thing is apparently on YouTube. Check that out before it's taken down very soon.