by Roderick Allmanson at precisely 00:20
A few weeks ago now we saw the release of TED (2012), the first foray for auteur Seth MacFarlane into feature films. It was set up to be the R-rated comedy of the year, and despite being incessantly quotable, it doesn't quite reach that status. Along the way though, we have Family Guy permutations and possibly more Bostonisms than The Departed (2006). Mildish SPOILERS to come in this discussion of racist homophobic teddy bears, so shy away if the stuffing's not for you.

Seth MacFarlane is intriguing amongst the Hollywood elite. Can we call him that? He's at least as much of an auteur as someone like George Lucas or Tyler Perry, in that he basically creates original stories on his own that remain very distinctive. He exists outside of the typical entertainment spectrum; existing as a surrealist commentator more than a master of narrative. More than a novice of narrative, really. 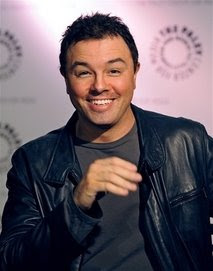 This is really the key to MacFarlane. He's a master joke teller because he can say the worst imaginable things but with enough charm and a smile to make you like him. In fact, it's bizarre that he avoids so much live action, considering both how good he actually looks (for sure he's no Matt Groening), and how well he crafts a live presence. He's fearless, inimitable, and has insanely good timing. In fact, some of the jokes in TED are left to dangle in the wind as if he's trying to subvert the very medium of comedy, but this comes off more awkward than innovative. The greater issue is the aforementioned problem he has with crafting an interesting narrative or characters. Family Guy, American Dad, and The Cleveland Show are all variations on the same kind of postmodern pop culture jokes, which is fine and can be hysterical, but it doesn't foster the kind of emotional investment required for more sustainable entertainment, such as film.

So here we have TED. It's an interesting intersection of film and television, to be honest. Not only does it contain MacFarlane as the voice of the eponymous Teddy Bear, but appearances from Family Guy series regulars Alex Borstein, Patrick Warburton, and Mila Kunis, as well as voiceover from American Dad voice Patrick Stewart. Beyond that though, the humour is very much in the vein of his television style, even including some breakaway gags. It's also painfully clear that MacFarlane can't move past the 80s (although he has some nice commentary on 90s-style rock singing), as vital elements of the plot revolve around Flash Gordon (1980) for some reason. There's also this weird love of Tom Skerritt. His inability to do any other kind of joke has become debilitating.

To some extent it's almost as if MacFarlane is making fun of his audience. Flash Gordon is relatively obscure, even if people know the name or Queen Song from Blades of Glory (2007), it's rare anyone gasped when Sam Jones was mentioned. MacFarlane's devotion to this kind of stuff positions himself over his audience - we laugh because we want to know and be included in what he thinks is cool. I don't know how MacFarlane did this, but it's an insane approach to an audience, tho his faithful eat it up.

Needless to say though, MacFarlane may have one of the best voices in Hollywood. He clearly understands how sharp and quotable that thick Boston accent can be, though when he breaks and does Stewie for a second, he loses that hold a bit, reminding us we're watching a film made by someone whose bread and butter was, is, and will forever be in Television. That kind of moment is worse than the commentary that Ted "sounds like Peter Griffin," because it's not inherently part of the joke.

Anyway, between this and That's My Boy (2012), the Boston travelogue is fairly heavy this summer. TED hits on just about every Bostonism - the thick accents, a climax at Fenway, the Bruins, and an adoration for Tom Brady. It also captures a lot of the racism. This is a ridiculously racist and homophobic film. There isn't really anyone who isn't targeted. It's liberating to disregard any shackles of political correctness, of course, but I'm not sure the kind of strict homophobia to the extent that two males can't hug without reassuring themselves they're not gay is relevant anymore in our society. That's not to say it's an inappropriate joke, just a less funny one, because no one relates to that kind of feeling anymore. There is ultimately a lot of gay stuff in this film though, from the bizarre Ryan Reynolds cameo to Puddy's confusing gay fight club. I don't think that MacFarlane is personally intolerant and he is willing to make a good joke where many others wouldn't ("Yeah, whatever, thanks for 9/11"), but to some extent he's stuck in the frame of time and mind that he's clearly making fun of.

It's also strange to see a film cut down so many celebrities at once. Often directly by name. Hell, the film ends directly disparaging Brandon Routh and Superman Returns (2006). Other debasements are weirder, like a duck named James Franco and the debate over the race of Norah Jones. Of course that last one is to Norah's face, and I never realised how hot that chick is. It's also certainly not a coincidence that she just released an album, Little Broken Hearts. There, there's some more free marketing for you Norah.

Well, it's about time I get to the greatest actor of our time, Mark Wahlberg. Wahlberg is usually at his best in comedies like this, The Other Guys (2010), and The Happening (2008). He does what he needs to do here, which is actually strangely similar to his role in The Fighter (2010). In that Oscar-winning film, Mark played the rock, the core, really the only sane individual surrounded by a sea of crazy Bay Staters. He's similar here, everyone around him is wild and crazy while he is actively trying to pursue his own dream life, while his loyalty to his closest relationship (Christian Bale in The Fighter, his Teddy Bear here) threatens to undermine that. I hope that was purposeful.

It's also cool to see Mark and Mila together again after Max Payne (2008). It's like Sandra Bullock and Keanu Reeves teaming up in The Lake House (2006) years after they did Speed (1994) - just a bizarre change of genres for a pair with good chemistry. The only disappointing thing is that Mila is more in Jackie-bitch mode than she has been lately in things like Forgetting Sarah Marshall (2008), The Book of Eli (2010), and Black Swan (2010).

In the end, you can look at TED many different ways. It is pretty funny, the timing of the jokes is interesting and I'd like to spend more time examining them, and their content should push the envelope. It has some great party moments, some nostalgia (if you know who Sam Jones is), and provides a general love letter to the City of Boston. If any of this appeals to you, you'll enjoy the hell out of TED. If you live in the world outside of New England, you may need to stick with 21 Jump Street (2012) as the best comedy of the year.