2019 FINISHED! Movie Stuff of the Year

by Roderick Allmanson at precisely 08:06
It's that most lovely time of year, folks. Not only do we countdown our movies and scenes and music and all the food we ate, but we dig a little deeper. This column has ranged a little bit over the years but we're sticking to the basics in 2019. Can't you tell? Actor of the Year

One may only look towards the Golden Globe nominees to see how weird 2019 has become. Hanks, Hopkins, Pesci, Pacino, Pitt reads like it's 1991. What the hell is going on here? After Once Upon a Time ... in Hollywood and Ad Astra, is Brad Pitt having the best year? Is he really the definitive Actor of 2019? Keanu Reeves was certainly the Actor of May 2019. Adam Sandler? Again, 90s. Shit, man. James McAvoy actually had one of the more prolific years, with Glass, It: Chapter Two, and X-Men: Dark Phoenix. Every single one of these movies felt like the lesser version of their predecessor, though. Going with IT, hell, maybe it's Finn Wolfhard or Bill Hader.

Let's go with a classic double shot. Chris Evans gave us the most defining performance of the biggest movie of the year as well as played that completely against type in a critical and commercial darling (that made 6% of Endgame's total worldwide). I'm not totally sold on it, but between Endgame and Knives Out, Chris Evans is maybe THE ACTOR of 2019. Of course The Rock has Jumanji coming out to add to Hobbs & Shaw. And Adam Driver has The Rise of Skywalker to add to Marriage Story and The Man Who Killed Don Quixote and The Report. Maybe it's Adam Driver's. It certainly feels like a bigger year for Driver rather than Evans. Let's go with him. 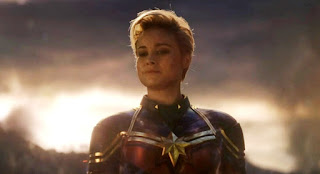 Actress of the Year

Jessica Chastain has the same deal as McAvoy. I mean, quite literally, they were in the same movies. Poor cultural influence, though. Scarlett Johansson goes the Adam Driver route of Marriage Story and a big one, Endgame. Jennifer Lopez is hot right now because it's the 90s. Daisy Ridley pulled down Jumanji and Endgame. Endgame casts a long damn shadow.

Naomi Scott should fit the bill. Huge movie with Aladdin and a solid follow-up franchise starter with Charlie's Angels. Except the former bombed and seems to have passed quickly from memory. Even Aladdin doesn't seem like it ended up holding much weight. That's not fair - Scott is the biggest non-Will Smith name in that cast! Oh, maybe that's why. Margot Robbie had OUATIH and the upcoming Bombshell which would be a really good case in any other year...

But let's go with a no brainer, a newbie who held her own against actors who have been doing this superhero thing for eleven years. Brie Larson in the one-two punch of Captain Marvel and Endgame proved herself to be a cultural force this year unlike many who came before. I have no idea where they're taking her next (she was conspicuously absent of Marvel's next plan. They also didn't really know what to do with her for most of Endgame. Cool. Can't wait to see what's next whenever they think of an actual idea.

Trailers of the Year

I really didn't watch many trailers this year. I've kind of stopped. Even for movies that I think I'll like - I most just go see them instead. There weren't a ton that stood out. There are a few Christmas releases that have all been pretty interesting. Let's rank by order of goodness:

Jumanji: The Next Level

Jumanji: Welcome to the Jungle (2017) was a huge guilty pleasure for me. I have no shame about this. This sets up a sequel with the same exact premise but pushed even more insane by having The Rock play Danny DeVito and Kevin Hart play Danny Glover. The trailer shows all this and more. It works on premise more than stakes and it does a great job of getting me interested in wasting $10 this Christmas.

According to early reviews, this trailer is a little better than the final film, which seems to deal with more surface level Fox News issues than digging deep into these problems and providing a proper #MeToo film. That's okay - we can still watch this trailer and pretend this is the massive takedown film it could be. Starring three fantastic actresses in different stages of their careers coming together is amazing. It's like a blonde version of The Hours (2002). I'm a big fan of teasers that show one simple scene that demonstrates the feel of the entire movie. Bombshell knocks this out of the park.

Lol just trolling you. But really, this trailer is fine, great even. The subject matter is just so cuckoo bananas off the mark that there's no way anyone will see this film except for the dumpster fire memes it will generate. Ooh, we should just through Sonic The Hedgehog (2020) on this fire, too. I'll give the Sonic people all the credit in the world for admitting a weird mistake and correcting it. CATS not so much. They really should probably just have human bodies or cat bodies, not somehow both. 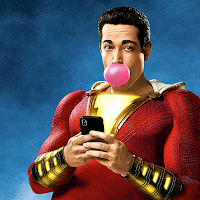 Hero of the Year

There are so many good candidates. Iron Man? John Wick? The Girl from Crawl? Queen Elsa? Let's go with a dark horse candidate from an insanely underrated movie - SHAZAM! This was all about a kid who wants to be a hero, and then becomes one, but has to learn that it's not that easy. That sounds simple, but this fun flick paid off in really satisfying ways that felt weirdly under the radar for a major DC movie. I guess that's why.

It was a really weird feeling. I think about who I would want in my corner. I just want Shazam there zapping folks. We probably need a Shazam vs. Thor movie now. That would be perfectly fine. I welcome the haters for not picking a single character from Endgame. Or CATS. 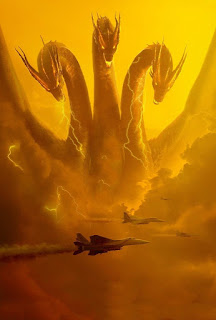 Villain of the Year

Eek! I've been waiting seven months for this! It's King Ghidorah from Godzilla: King of the Monsters! I heartless alien fiend that can't be reasoned with or spoken to - merely unleashed and then uhh...leashed. It's a literal alien monster hurricane that destroys most of the planet before Godzilla can nuke him out of Boston. He's fearsomely powerful, intelligent, and untouchable. It's perfect.

Ok, Thanos, Joker, It, the alligator from Crawl. Or the entire village from Midsommar. Or the Tethered from Us. Damn, these are all good candidates. I'm sticking with Ghidorah. My second pick would be SPOILER stop reading if you haven't seen Far from Home, but you should honestly have figured this out - Mysterio! Slyly powerful, a master emotional manipulator, mind games, illusions - always one of my favorite villains brought to life in the best possible way. It's honestly better if you don't know he's a villain, but also every single appearance of Mysterio in every comic, TV show, and video game has started out like this. That Far from Home actually still sells that and almost convinced me, is brilliant. It's like Paul Rudd totally definitely not playing the same Mac and Me (1988) clip on Conan.

2019 was  a very big year. Endgame, Star Wars, Marvel, Disney remakes, Pixar fourquels. It's a lot. Maybe I'm just digging a bigger niche hole for myself, but not many of the biggest movies seemed to make a cultural impact, though. Where are the Toy Story 4 and Lion King memes? I'm at a point where I'm not actually sure if I just have superhero algorithms blasting at me in my self-perpetuating bubble or nothing else really made an impact.

There were massive flops. Audiences may actually be getting tired of seeing the same crap totted out over and over again. To be specific, though, they still want crap, just new old crap. There are weird Disney flops, though, like Mary Poppins Returns (2018) and Maleficient: Mistress of Evil. Comparative flops, of course. It's clear that audiences are sick of some stories, like ANOTHER X-Men and ANOTHER Men in Black and ANOTHER Terminator. Yeah, remember all those came out?

It's time to rank the original movies at the box office. Us is still in the Top 10 and there's totally not a movie coming out Friday that will knock them out... Next up is Hustlers at #25, then Ford v. Ferrari, Good Boys, and Knives Out, getting down to #34 at that point, still over $75 million. That's not entirely terrible, but far from a great sign.

In 2020 we have no Avengers, Star Wars, or Jurassic Park movie. We have one Disney remake, Mulan, a Godzilla movie that will probably do no money, a ninth Fast and Furious film that I'm actually predicting is over (no trailer yet?), a Ghostbusters movie that maybe won't suck? AKA Stranger Things: The Movie. DC is sure trying to have a big year. I've talked about WW84 and they have Birds of Prey as well. Marvel really only has Black Widow. Sure, The Eternals, but what the hell even is that, guys? There is a new Bond movie, and supposedly Daniel Craig's last, but Bond has been retiring for longer now than between Casino Royale (2006) and Skyfall (2012). Sure.

What did you like about 2019? Looking forward to anything next year?