2019 FINISHED! Top Movies Seen for the First Time in this Calendar Year

by Roderick Allmanson at precisely 18:51
This is always a weird column because it's really a shine towards my personal tastes. Basically, every year I keep track of every film and TV show I watch. To me this is more genuine than a simple "Best of 2019" list because it's more a ranking as if every movie I saw for the first time had come out in 2019. This is so subjective. But for you, dear reader, it works as a way to highlight maybe a movie that has been otherwise lost in the shuffle, or there could be something you haven't heard of or haven't gotten around to. I like it. For the first time doing this, I'd also like to exclude any film actually made in 2019. Now that's a lot to think about.

Let's do a quick run down: 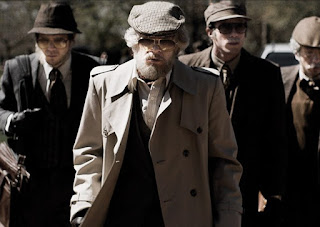 I've never quite seen a film constructed like this in faux-documentary style which is kind of an actual documentary? It plays with its narrative as it goes, inviting the actual participants of the failed heist of the most expensive book of all time to comment in talking heads on what we're watching Evan Peters and company act out. Beyond that it's also a gripping story about how easy it is for white collar college kids to hop into serious crime, or at least think they can. There's real consequences here and the film isn't afraid of a downer ending. This snuck under the radar in 2018 and even though I caught it in January of last year, it stuck with me.

I watched this movie out of both a desire to see more old Universal Studios horror movies and because I've never jumped into that much Abbott and Costello. This movie was hilarious. In an age where we seem to be struggling to find our comedic footing it was amazing how great their timing was, how quickly they establish their characters, and how funny they remain seventy years later! It's suddenly apparent why these comics are considered timeless. They literally are! This was also a nice way to get Frankenstein, the Wolfman, and Dracula all on screen together, almost all played by original actors! I just kept thinking about like, Seth Rogen and James Franco starring in a Freddy vs. Jason movie. That's about the equivalent here.

This is a classic that hopped on Netflix, so no brainer here. In the past few years I've been trying to expand my Paul Newman and Steve McQueen knowledge and what struck me the most is just how much of an impact this film has had on the past fifty years of culture. So many Simpsons references I now understand. It's such a simple movie but works as a brutal prison movie, a character study, even in some ways as a comedy. The amount of assumptions here that keep the film moving despite its long runtime, the cleverness of the escape attempts, and the very real and demonstrable stakes make this still a great one.

I was surprised that this wasn't appreciated when it came out. Maybe I thought it was more of a classic than it was, but I ended up loving this. I had always avoided it, maybe it seemed like more of a Red Dawn (1984) bro flick or something to me, but it was consistent, exciting, dramatic, dangerous, and pretty fun. Swayzee is great on his own then young Sam Elliott shows up! Fantastic!

Not about liberating Han, this is a recent documentary about professional rock climber Alex Honnold who loves climbing so much he tends to do it without ropes. Watching Alex's personal obsession with danger is almost as impressive as his ability to hold on by his fingertips thousands of feet above the ground on a slick sheer surface of rock. The real-life danger is always present and this could have turned into an absolute tragedy with just a few more strong breezes. The fact that there's only one way out of this profession is the most depressing stat yet. Good movie!

Okay, no 2019s but we threw a lot of 2018s in that we just didn't get to that year. This movie is bonkers and probably a little bit exploitative of what it's trying to satire, but it's also the most coherent statement on privacy in an age of both hacks and just general Internet stupidity. It's laced with irony, lust, terror, revenge, and righteous fury. I loved this movie. It gripped me hard and never let go by piling insanity over insanity, all fairly motivated.

This was an offbeat choice to watch - a relatively obscure John Carpter film starring Sam Neill right after Jurassic Park (1993). That this was his next film should say a lot about Sam Neill. It's like a Lovecraft story without exactly being Lovecraft and on the surface seems like a Stephen King story without quite being that, either. It ends up being a trippy dance with the nature of insanity and reality, which has enough mind-bending moments that was right up my alley.

This is another classic that for some reason I had never gotten around to. It is preceded by a fifty-year reputation for changing filmmaking, but the most I really knew about it was Faye Dunaway and Warren Beatty screwing up the Oscars and that Jay-Z and Beyonce song. I've been missing out. It's a competent period piece that says more about the relationships between impotent women and potent women than it does about cinematic violence. Or at least that's a much more jaded 2019 perspective. It's really a brutal film that makes you sympathize with horrible spree robbers and thoughtless killers. It's all part of this film's magic that these two are heroes.

I've definitely been on a Herzog kick, and this was an obvious choice. It's clear that I'm attracted to totally off the wall films and this is up there. I mean, this was enough:

There are coherent criticisms of colonialism mixed with a Colonel Kurtz-esque search through an impenetrable jungle where hope slowly decreases until it's clear that there is no going back from this mad journey. From there it's fun to see Klaus Kinski double down on desperate craziness rather than finding any rational way out. There is ultimately no purpose for the Conquistator's journey, but pride be damned if they admit that.

Invasion of the Body Snatchers (1978)

Conceived in the paranoid 70s, this film echoes even more in the current day. It's a classic story of pod people replacing everyone on earth and gets points for its escalation, complete failure of government institutions, and of course, the greatest scream in cinema history. It's subtle sci-fi that brewed a phenomenal cast, offers protagonists that twist and turn and become hard to trust, and provides a weary chase where everything we think we love is taken away. Fun for the whole family!

What did you watch this year? Any gems or classics you caught up on that you should have watched years ago?