Because it was on TV: The Brilliance of The Cable Guy

by Roderick Allmanson at precisely 16:04
If you're like me, that is, living the same exact life I am, then last Thursday night you of course found yourself enjoying a nice does of The Truman Show (1998) on AMC. As expected, a sincere delight. If you're also like me, then when that, perhaps the finest of Jim Carrey's performances concluded, your eyeballs remained on the television for a rare airing of The Cable Guy (1996). I had never watched this film before, for good reason. When it originally came out in theaters I was one enthralled by the Carrey classics that appealed to my demographic, that is, an 8-year old boy obsessed with farts - Dumb & Dumber (1994), The Mask (1994), and the Ace Ventura franchise. This new scary dark Jim Carrey had no appeal to me. When it premiered it was universally reviled. It almost wrecked Carrey's career - in fact, one could argue that his career has never regained the momentum it had in the early mid-90s. 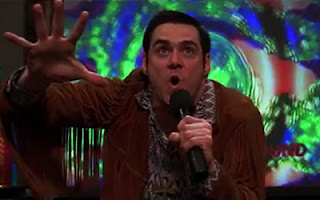 So, 16 years later I actually watched this thing. And I was impressed. By all standards, this should have been a comedy dream team. Directed by Ben Stiller, written by Judd Apatow, and starring, in addition to Carrey, Jack Black, Owen Wilson, Ben Stiller, Leslie Mann, and Matthew Broderick. It's incredible. With Andy Dick, Janeane Garofolo, and Bob Odenkirk, it reunites just about the entire cast of The Ben Stiller Show. So, what happened?

First of, The Ben Stiller Show, though revered in some circles, was never that great. This was also the Judd Apatow who was just starting to branch out from a successful TV career, making movies more like Celtic Pride (1996) than The 40-Year Old Virgin (2005). This was also before any of the aforementioned comedians had really honed their talent or found a niche that supports them. Jack Black in this film plays an athletic friend of Broderick's who is instrumental in suspiciously snooping out Carrey's stalker character. He doesn't even scat. The "Jack Black" persona is totally different than what we see in this film. He's present but any actor could replace him. Ditto with Owen Wilson and Odenkirk. None of these guys are supposed to be playing anything funny.

This brings us to the major caveat with this film - it's not supposed to be funny. We can talk about comedic personae here, because at this point, Carrey was the only one with a very well defined one. The thing about this movie, and what also makes it great, is that Carrey is totally exemplifying that persona. He's loud, goofy, friendly, smart-alecky, and full of silly faces, insane body movements, and oodles of pop culture references. The difference is that no one in this film likes him.

Now, in a movie like Ace Ventura: Pet Detective (1994), no one also likes his character. Yet there are a few who inexplicably put up with him. Hell, he even bangs Courtney Cox at the end. In The Cable Guy, he plays almost an identical character, except he has a lisp, and he's painfully, pathetically lonely because he's so abrasive to every other character that no one can stand him - except of course for those he manipulates. This is in fact, simultaneously a much more realistic of what effect this kind of character would have on the world around him, and a critique of the Carrey Comic Persona. 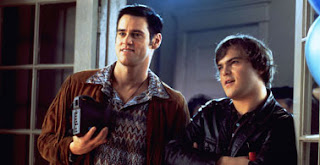 This has happened with other stars, tho perhaps not as publicly. In Adventureland (2009), Ryan Reynolds plays the kind of witty charming sleazeball who hits on underage girls, almost identical to the character he played in Van Wilder (2002) and Waiting...(2005). Except this character isn't actually likeable in real life, nor is it as cute, cheeky, and cheerworthy as his other films would have you believe. He's a mysterious scumbag in Adventureland, which is exactly how everyone should feel about the Classic Ryan Reynolds character. You can also see Seth Rogen doing this in Observe & Report (2009), and to an extent Adam Sandler doing this in Funny People (2009). Yes, 2009 was a big year for this. None of these films did very well, and they are all widely hated, but that's mostly because they upended expectations and none of them were very funny. That however, has nothing to do with whether or not they are good movies, merely only if you're disappointed in not getting the laugh you expected.

The Cable Guy does the same thing, and for a major A-List star to have this huge Fuck You to his established comedic name at the peak of his career is groundbreaking. It broke so much ground that Jim Carrey's star hasn't really shined nearly as well since. Sure you've got your Man on the Moon (1999), Bruce Almighty (2003), and Eternal Sunshine of the Spotless Mind (2004), but none of these are really the insane stupid majesty that Carrey established doing rounds on In Living Color.

What's also interesting to me is that though they were all contemporaries, this film feels like it was a bunch of rising stars with an established teamwork working with one Megastar. It was the Ben Stiller Crew holding up Carrey. The only other example of this I can think of is the aforementioned Funny People, which had the established but relatively new Apatow Crew centered around Adam Sandler as their comedy legend. I think in both of these cases we ended up with great films, but probably shitty comedies.

Under new eyes and a fresh understanding of Carrey's career, I think we should all take another look at The Cable Guy, with the understanding that none of us would like this man in our lives - but with the understanding as well that this is the same dude from all of Carrey's early films. Maybe that's why we hated it so much - it made us realise how awful this dude is in real life, thus dampening our earlier great experiences. There's no reason why we can't separate the two though. Plug in The Cable Guy again - I think you'll be surprised.