by Roderick Allmanson at precisely 06:25
Can you believe it's the fifteenth Week of Summer already? According to our reckoning, we've only got two weeks left before we all have to shuffle on back to school. No more Jams. No more big stupid blockbusters (just big smart ones). No more sunshine, hopes, or dreams. But we've got two weeks left, so we need not yet despair. Every week in this, our Last Summer before the world ends (tho not if Nic Cage and John Cusack have anything to say about it!), we have counted down the hottest jams in the country. So hot - in fact - that they might just ignite the atmosphere and lead to what the Mayans predicted for us all along. Without further adieu, let us hasten the End of Days by starting off this countdown with some Nickelback:

Hot Track of the Week: "Trying Not to Love You" by Nickelback

This is the first of a few very fresh jams we're seeing this week, this video only came out on Friday. The song is fairly average (though that would make it above average for Nickelback...), but the video is what intrigues me. It centers around Jason Alexander as a talented coffee shoppe employee who tries to woo this girl and then gets upended by a flashy jackass also played by Jason Alexander. It's always weird seeing him as not George, but this crops up here and there (see Shallow Hal [2001], Bob Patterson...), which is actually a shame, because he's an incredible actor that, like every non-Julia Louis-Dreyfus Seinfeld actor, hasn't been able to outrun his most iconic character. What is he doing with Nickelback? Who the hell knows, but I'm grateful no one else showed up here and all in all it's actually a little touching at the end. He frolfs, he scores!

Another Break-Up Anthem: "We Are Never Ever Getting Back Together" by Taylor Swift

This is another superfresh jam, with no official video even out yet. There is a certain amount of well-deserved pride in this track in an age where Katy Perry is also releasing spirited cathartic tracks and Cher Lloyd is releasing regretful hook-up jams. We could probably track a whole relationship across Carly Rae's initial flirtation, Cher Lloyd's break-up and back together, Taylor Swift's final determination, and then Katy's maturity in dealing with the personal ramification. Yep, Katy Perry is the most mature one in this group. What are we coming to. Taylor jams are always going to be pretty good, I don't think this will really be a rocking success, but good for her.

Fluorescent 90s Throwback Fun: "Settle Down" by No Doubt

It's kind of weird that this song says to get in line and settle down, when nothing about the beat or rhythm suggests so. It's a groovy jam for sure and cool to see No Doubt get a little hit on their hands. It does sound exactly like their old stuff and probably could have been released seamlessly in 1996. No Doubt is one of those bands that you hear is back and you think "Man, I hate No Doubt!" then you get caught in a little and realise that yeah, you love all their songs. It's okay - you're not alone.

This video was released last Thursday and boy does it suck. There's not a whole lot of chance this takes off, it's so typical and uninnovative that it should be forgotten immediately. I included it here, though, because it primarily features Taboo - who you don't remember until you see this idiot and then remember "Oh yeah, the worst member of The Black Eyed Peas." Apparently this dude is trying to make it out on his own like Fergie and will.i.am did. Isn't that cute. Shut the fuck up and get back to dancing in the background.

Guiding Prometheus: "Some Nights" by fun.

I may be running out of fun. jokes. All I go on is basically how much I hate the punctuation of their band's name and how much the lead singer looks like a young Guy Pierce. So, fun. has had. quite. a fun summer.. - between this. and "We Are Young," they've certainly captured the pop alternative youthful pride / party anthem market. This is a fun song, though, and Guy Pierce's voice is pretty hard to imitate. Yes, I try. Just try to scream "set the world on fire!" and not sound like a jackass. Or rather sound less like a jackass. It's tough stuff. fun. has my respect for that. Not for their grammar, though, it really screws up my writing about them. Jerks.

I heard this jam a lot this week, which is cool after it had been absent but ever present in the background for quite some time. In the pop world, though, it's still more white noise than anything right now. David Guetta's beats are atrociously bland and Sia's voice doesn't really have anything distinctive about it, despite a strong core competency (Unlike say, Cher Lloyd. Or even Rebecca Black). I don't really see them going anywhere, although Guetta's already famous and rich as hell. That really is only because of this weird niche DJ movement going on right now, that is moreover merely loud, flashy, and attention-grabbing than actually popular. It's a great ruse that Guetta actually has talent.

After securing the longest-running stretch at #1 on the Billboard Hot 100 last week, Carly Rae fell to #2 to Flo Rida this week. Flo Rida is absent from this countdown, however, because we really didn't hear it that much this week, and no one was really jamming on it. It's alright that Carly slipped a bit, she wrapped up the Queen of Summer status a long time ago. 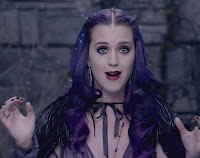 I think I figured out how to articulate my frustration with Katy Perry's hypocrisy this week: The premise of this song is a regretful alternative look at Katy's last few years of fame since "California Gurls" blew up both her career and her relationship with Russell Brand into the public spotlight. It's about reconciling with her younger self and taking the chance to be mature and do things differently had she the chance to start over - her innocence saves her from the demons of fame and popularity. Bullshit. The video ends with her rising through the stage for her Concert Movie released last month. That's the culmination of this shit - a bigger stage, more fans, and more fame. It's a hoax - fake like every other part of Katy Perry. It's a tease, gurl. Just when we thought there was something deeper she just proves an inability to reject attention. Or maybe that dreaded cycle is the point. Like the ending of The Hurt Locker (2009). Maybe we'll just keep dreaming on that one...

Like I said, we snubbed "Whistle" this week, if it keeps blowing up it ought to be back next week. Carly Rae may continue declining, which is fine, and we'll be looking at Pink and Cher Lloyd's stocks to keep rising. This week was totally absent of hip-hop, and we'll hope someone has a good jam out there, tho all we're seeing right now is 2 Chainz. That doesn't give us hope. Turn up those knobs, people!