by Roderick Allmanson at precisely 03:47
As we near the end of August it's time once again for an installment of The Long Halloween - Norwegian Morning Wood's glance at all the great holidays and what TV Shows, Movies, or Music would be a perfect fit with them. This year, though, we ignored all the so-called "popular" holidays and instead went for the really insane, obscure ones. The best ones. Today, August 30th, is National Frankenstein Day.

So what to watch on Frankenstein Day? Well, you watch the original film from 1931 for starters. Or, if you're feeling spicy you could pop in Mel Brooks' Young Frankenstein (1974). But ultimately, we really want to get down to what Frankenstein really means to all of us. But why this day? August 30th is the Birthday of Mary Wollenstone Shelley, who wrote Frankenstein; or, The Modern Prometheus in 1818. Supposedly it was written as a sort of consequence of the Eruption of Mount Tambora in Indonesia. How's that for a butterfly flapping its wings? 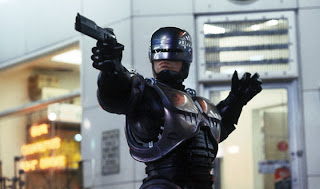 Frankenstein and his eternal struggle with his Creation, have become a template for sci-fi / horror for the greater part of two centuries. Many stories have echoed or paralleled a human affront to God through their own creation. There are plenty of obvious parodies, but any film where we are destroyed by a creation fits a nice little Frankenmold. Like this Summer's Prometheus (2012). Of course, both Ridley Scott's film and Mary Shelley's novel are oblique references to an even earlier Greek tale warning of the hubris of extending oneself to manipulate forbidden technology. I'll even stretch out to a flick like The Cable Guy (1996), where the protagonist creates a friend who then stalks his life searching for meaning and acceptance, eventually taking over his girlfriend and family in a warped attempt to fit in and gain acceptance. These are all basic Frankenvalues. Sorry, it's fresh on my mind. The point is, any tale can be a Frankentale. Take films like Blade Runner (1982) or Robocop (1987), which feature creations searching for meanings to their tortured lives, the latter also crafted from spare parts, and ultimately kill their creators.

More traditional (yes, somehow) adaptations include The Rocky Horror Picture Show (1975) and Edward Scissorhands (1990). Plenty has been written about this crap. I'm more curious about Frankenstein's weird role in pop culture, where he does everything from fight Spider-Man to Conquer the World. The creature (he is the Monster, after all, Frankenstein is the Good Doctor), it would seem, is capable of just about anything. Even being played by Robert De Niro, which could be his second worst role.

There's only two Frankenstallments I really care about - and that's watching Mary Shelley's Frankenhole while eating Frankenberry. Now, obviously it's not as good s Fruity Yummy Mummy, but for National Mummy Day we can do what he wants to do. Frankenhole is a brilliant show by Dino "Starburns" Stamatopolis, and Frankenberry is a fabulously mediocre sugar cereal. Combined, though, they make for a perfect way to celebrate National Frankenstein Day.

Let's spend a moment talking about Frankenberry. I never thought I would write that sentence. Anyway, a simple Google Image Search presents many many artist interpretations of this, one of the first openly gay Cereal Box Mascots. You've got the ironic tough Frankenberry, the psychotic Zombie Frankenberry, the Realistic Frankenberry, or just the Even Gayer Frankenberry. The applications are almost as endless as with Frankenstein himself. I suppose it's just because both the idea of Frankenberry, and the actual appearance of the guy is so tremendously stupid. It's perfectly acceptable to display this retarded mug in just about any variety possible.

So what about Frankenstein himself? The poor lonely Creation's character is probably most authentically represented in Frankenhole, which is another reason to watch that show (as if you needed it). It's a bummer being alive, especially if you have an Abnormal Brain. Frankenstein is always on the border between life and death, just as Frankenberry is always on the border of hungry and the desire to not eat Frankenberry Cereal. And so, as we dance, life twirls on.