The Road to a Blockbuster: Brother's Justice Reborn!

by Roderick Allmanson at precisely 00:08
In this long Final Summer before the World Ends in 2012, we have gone through a lot of movies. Every Friday as part of the Road to a Blockbuster series, we determine the potential cultural, critical, and commercial impact of every wide release. The Summer Season is just about over this week, as we can tell from the torrid string of releases this week. Somehow by mid-August every great part of Summer dries up and everyone starts taking that big breath before the plunge into Fall. That said, today we conclude our Road to a Blockbuster with a look at three movies that will probably crash and burn at the Box Office. 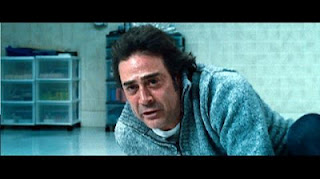 The first is a horror movie, The Possession (2012). Oh wait, I mean The Apparition (2012). The Possession, which looks like a Jewish version of The Apparition, comes out next week. The Possession actually looks kind of cool, old creepy Jewish Mythology like the dybbuks and golems. My primary understanding of dybbuks of course comes from A Serious Man (2009) and Rugrats. I'm not the only one, either. Of course, this film doesn't even come out this weekend. The Apparition looks fairly dumb. Draco Malfoy is in it, though! Late August tends to be a dumping of Horror films for some reason, though. This happened for a few years with Rob Zombie's takes on Halloween as well as those Piranhia DD flicks. And recent Final Destination installments. It's kind of wild, actually. Why not come out, you know, during Halloween? Who knows. What's more likely is that studios need a dumping ground for these kinds of horror franchise films and when a few flicks did well, it was time for everyone to try their hand. It sucks.

I don't think The Apparition or The Possession will revolutionize horror films or films in general. They're very forgettable, interchangeable horror experiences. These kinds of films haven't done well financially, either, and August is typically anemic to these kinds of flicks - even if some of those franchises mentioned earlier did comparatively well. 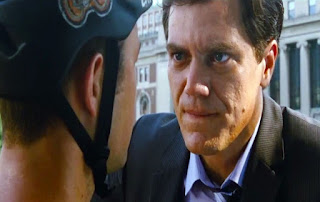 Moving on, we have the bikour movie, Premium Rush (2012). Is "bikour" a word yet? Can I claim to have made that up? It's a portmanteau of bike and parkour - doing crazy urban movement tricks on your bike. Sound cool? Then we're not going to get along. If anything though this should contribute to Joseph Gordon-Levitt's strong case for becoming the actor of 2012, what with The Dark Knight Rises (2012) and two other highly anticipated upcoming films, Looper (2012) and Lincoln (2012). Channing Tatum better watch his ass or he's going to be upended as the most overexposed actor of the year. Gordon-Levitt is 2012's Michael Fassbender. It's also cool to get a preview of Take Shelter (2011)'s brilliant Michael Shannon as a big bad before he goes all Zod on us in Superman Lives (2013). Or what was it? Man of Steel (2013)? Gotcha. Yep. No Nic Cage in sight. He's a perfect nasty bad dude though, and he ought to be the shine of this film.

But this won't really do that well. It will probably be remembered as that obscure bikour film that helped Joe and Mike get a couple good roles down the line. It's not that interesting a premise and Joe doesn't really have enough star power to carry a movie yet. Then again, there's the possibility that no one does these days. Still, it's an original story in a bit of a dry spot of the year - it could do decently. There is a bit of intrigue in the marketing, but it's not all that compelling. We'll see how it ends up. 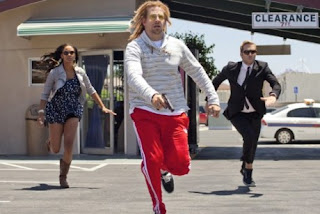 That all brings us to Hit & Run (2012). If any of you have seen either Brother's Justice (2010) or read its well-articulated Wikipedia page, you ought to be pretty excited. Hit & Run returns almost an identical cast, made up mainly of Dax Shepard's friends. For some reason, these friends are like, Bradley Cooper and Tom Arnold. It's kind of a bizarre comedic troupe that I could see making a lot of crazy obscure films that no one can figure out is tied to the equally obscure Brother's Justice. The marketing has been interesting, and this could be a bit of a hit, but it's in about the same league as Premium Rush in being an original story landing in late August. So it has little chance of really landing.

Hit & Run actually came out on Wednesday for some reason. It debuted at 8th place for the day. I'm not sure what we can exactly gleam from this - as it's not like it was a holiday Wednesday or this was a big hotly anticipated release or anything. I guess it merely means that this probably isn't going to do shit in theaters. You gotta cheer some Tom Arnold, though. He's the guy in the van! He's sick of being the guy in the van!

Well folks, it's been a long and crazy summer. We saw a Big Green Giant punch an alien worm, Bane do his best goatse impression, Adam Sandler teach us how to laugh again, and Drake and Nicki Minaj provide the voices for animated mammoths. It's been...wildly mediocre, to be honest. What was the best film of Summer? Obviously it was Battleship (2012). Maybe Prometheus (2012). The funniest was The Campaign (2012) - sorry TED (2012). All in all, a good Summer. We had some good Olympics, good flicks, and plenty of ice cream for everyone. Now it's time to watch some Fall TV...